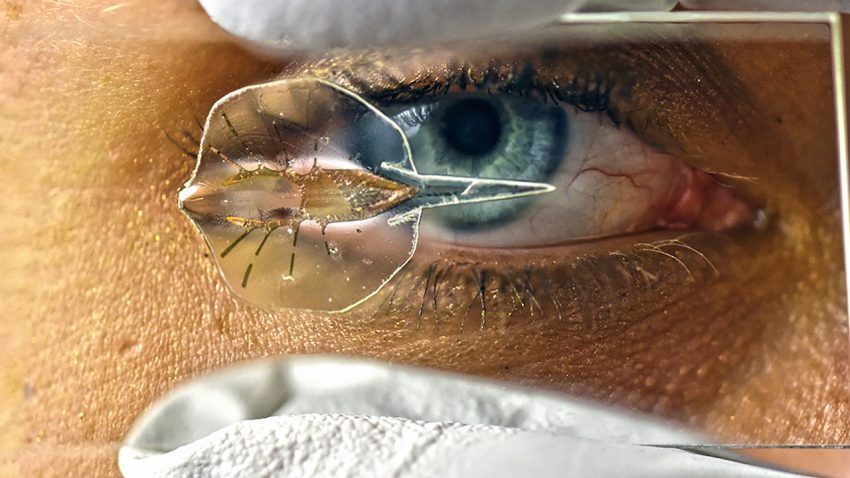 In this Science report, father’s and daughter’s obsessions have combined in an incredible creation: a nickel-sized artificial stingray whose swimming is guided by light and powered by rat heart muscle cells.

Some think that by melding cells and artificial materials into a pulsating structure, the device brings Kevin Kit Parker’s dream of engineering a human heart a step closer.

Parker, an applied physicist at Harvard University, made his first foray into robotics five years ago after he was captivated by the jellyfish during a visit to the aquarium.

His team had already gotten heart muscle cells to grow into thin films on silicon, and he wondered whether he could put the cells to work by incorporating them into a jellyfish-like “Pump.”

The result was a “Medusoid”, a mere artificial creature composed of heart muscle cells overlaid on a sheet of silicone molded into a shallow cup rimmed with flaps.

A bath of salt-sugar solution sustained the cells, and tiny jolts of electricity made the cells contract, changing the shape of the silicone cup so that the “Jellyfish” expelled liquid, propelling it through its bath.

“Maybe there is something similar with how the stingray changes direction and heart flow,” Parker thought.

When she was a toddler, Parker would guide her down the sidewalk by shining his laser pointer on the ground and having her stomp on the light.

Perhaps his team could do something similar in an artificial Ray by making the muscle cells contract in response to light.

They turned to optogenetics, in which cells are genetically endowed with light-responsive molecules that trigger signaling cascades.

Parker’s team had no experience with the method, but with a bravado befitting a lieutenant colonel who fought in Afghanistan before and after joining Harvard’s faculty, he decided to go ahead, cobbling together funding from the Army, the National Institutes of Health, and others.

Parker asked a new postdoc, Sung-Jin Park, to oversee the work, confidently predicting the project would produce a paper featured on the cover of Science.

Park and others began by taking apart stingrays to learn how the muscles were arranged; later, colleagues in another lab analyzed how the muscles drive the fins in the synchronized undulations that propel the ray. 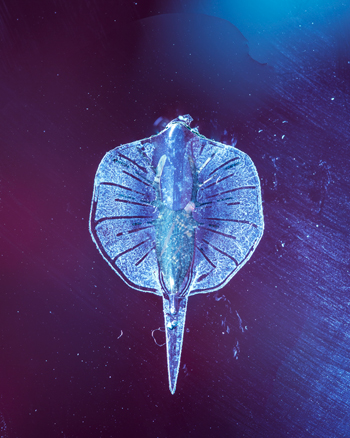 Animating each ray are about 200,000 heart cells harvested from 2-day-old rat embryos and placed on top of the silicone.

The silicone bears a template consisting of an extracellular protein, fibronectin, which guides the growth of the cells into a radiating pattern similar to the muscles in the real Ray.

Infected with a virus that delivers the gene encoding the optogenetic molecular switch, the modified cardiac cells twitch when blue light shines on them.

To negotiate turns, Park guides a ray with two light sources; one pointed at each fin.

The Rays move only about 9 meters per hour and turn slowly-quite pathetic by real stingray standards.

Fish, who helped design larger “Manta bots” with silicone fins flapped by electronic-controlled rods and cables, calls the rays “a significant leap forward concerning robotics.” He adds, “We’re getting to the point where there is a fusion between biology and engineering.”

It’s unclear whether the approach will lead to practical robots or Park and Parker’s actual interest: a bioartificial heart.

Simply putting down a second layer of muscle cells is daunting, never mind recapturing the full complexity of the heart or a complete animal.

The ray robot “Is not particularly related to anything in the heart,” mainly because the heart muscle cells are “Being used in a relatively unnatural way,” says Denis Buxton, a program officer at the National Heart, Lung, and Blood Institute in Bethesda, Maryland.

Parker regards his team’s miniature ray robot as a piece of art as well as technology: “Everyone is going to see something different” in it, he says.