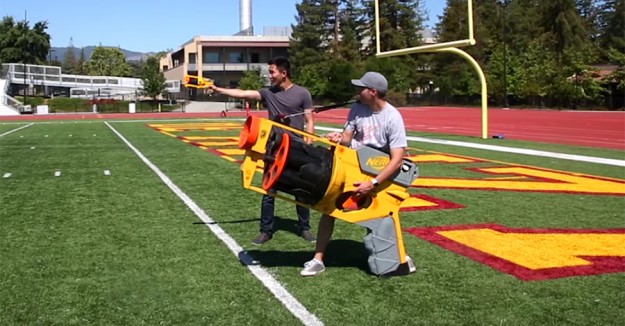 You know what our childhood  battles were missing? Accurate separation of duties.

Everyone either had a “Machine gun” or pistol and ran around like chickens getting shot in the eyes too often.

Where were the siege engines? The catapults? Your friends wouldn’t be able to gang up on you if you were flanked by giant NERF cannons or ballistas.

In the video above, former NASA engineer and now science YouTuber Mark Rober has created the world’s largest functional NERF gun to protect himself from office NERF fights.

It’s a giant recreation of a classic NERF pistol that is powered by a 3,000-pounds-per-square-inch paintball canister.

Still, Rober’s ginormous weapon can launch pool noodles with plunger tops at around 40 mph and render them stuck to targets.

When Rober changes the projectile size and shape, the NERF monstrosity can engage in squishy warfare from over a football field away.