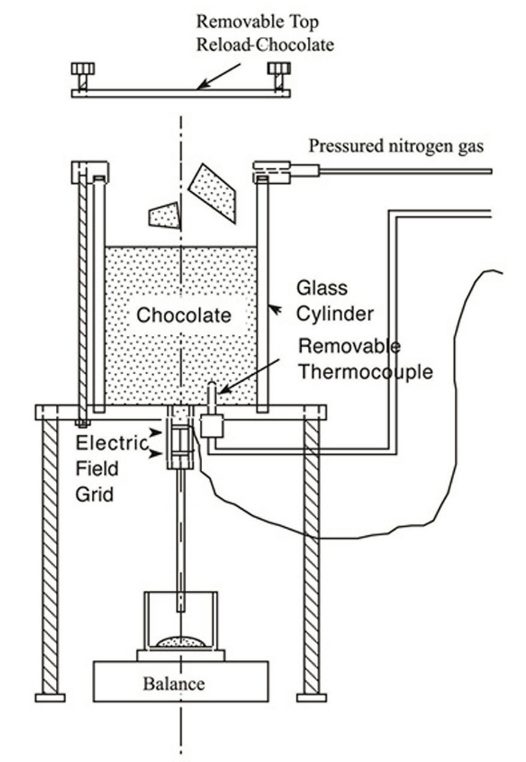 Leave it to scientists to take something as awesome as chocolate and make it even better.

By running liquid chocolate through an electric field, they were able to remove up to 20% of the fat while making the end product tastier.

Rongjia Tao, a physicist at Temple University in Philadelphia, had used a similar technique to improve the viscosity of crude oil so that it would be easier to transport through miles of underwater pipelines.

A consulting firm working on behalf of Mars Inc., the company that makes M&Ms and Snickers bars, reached out to him to see if the method might apply to chocolate as well, he said.

At a microscopic level, the mixture consists of tiny, circular cocoa solids that randomly bump up against each other in the liquid suspension of melted fat and oil.

This principle applies to the cocoa solids in chocolate.

So to keep chocolate fluid enough to flow through processing machines, there has to be a certain amount of melted fat mixed in.

If chocolate is too thick and gooey, it simply won’t move at the required pace.

Tao and his colleagues thought they might be able to solve the problem by borrowing an electric pulse technique from the oil industry.

In the lab, they built their device so they could measure the rate at which chocolate flowed through a tube a little wider than a cocktail straw.

Before sending the chocolate into the tube, they ran it through a pipe fitted with a series of metal mesh screens that produced an electric field when a current was run between them.

As the liquid chocolate passed through the electric field, the individual cocoa solids transformed from symmetrical circles to elongated, pill-shaped chains.

This allowed the solids to pack together more tightly, which decreased the viscosity of the chocolate and improved the flow.

Then Tao had an amazing insight: “I realized, this technology can not only reduce the viscosity, but it can also reduce the level of fat.”

In several trials, the researchers found that they could decrease the fat content by 10% to 20%. As if that weren’t enough, some members of the research team thought the electric-field-treated chocolate tasted better, too.

By reducing the fat content, the cocoa solids have more of a chance to stand out, said Tao, who added that he now has more than 300 pounds of leftover chocolate in his lab.

“I love chocolate and eat it quite frequently,” he said.

“I will eat more chocolate once it has less fat.”