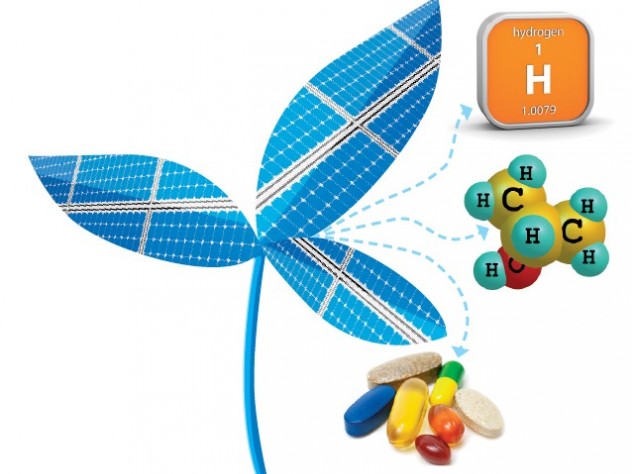 Harvard scientists have created a “Bionic leaf” that converts solar energy into a liquid fuel.

The work, a proof of concept in an exciting new field that might be termed bio-manufacturing, is the fruit of a collaboration between the laboratories of Adams professor of biochemistry and systems biology Pamela Silver at Harvard Medical School and Patterson Rockwood Professor of Energy Daniel Nocera in the Faculty of Arts and Sciences.

Silver dubbed the system “Bionic” because it joins a biological system to a smart piece of inorganic chemistry previously developed by Nocera: that invention, widely known as the artificial leaf, converts solar energy into hydrogen fuel.

Nocera’s artificial leaf, which serves as the fuel source in the bionic leaf, works by sandwiching a photo-voltaic cell between two thin metal oxide catalysts.

When submerged in a glass of water at room temperature and normal atmospheric pressure, the artificial leaf mimics photosynthesis.

Nocera has been perfecting the artificial leaf since he first demonstrated it in 2011; today, it is far more efficient than a field-grown plant, which captures only 1 percent of sunlight’s energy.

The hydrogen it produces is a versatile fuel from a chemical standpoint, Nocera reports, and could easily become the basis of a fuel cell, but it has not been widely adopted, in part because it is a gas.

Liquid fuels are much easier to handle and store, hence the new bionic leaf’s importance.

In the bionic leaf, the hydrogen gas is fed to a metabolically engineered version of a bacterium called Ralstonia eutropha.

“The advantage of interfacing the inorganic catalyst with biology is you have an unprecedented platform for chemical synthesis that you don’t have with inorganic catalysts alone,” says Brendan Colón, a graduate student in systems biology in the Silver Lab and a coauthor of the Proceedings of the National Academy of Sciences paper.

Colón has been developing a strain of the bacterium that grows well even at the lower voltages that might be emitted by the solar wafer at the system’s core on a cloudy day, for example; this could dramatically improve overall efficiency.

Fuel, she notes wryly, is cheap “Because we fight wars over it”-and developing a system that could make fuel at a price lower than gasoline would, therefore, be tough, she says.

Drugs, on the other hand, are high-value commodities, so engineering a bacterium to produce not isopropanol but a vitamin or a drug may be her next goal for this system.

Modern society, says Nocera, has created an entire manufacturing economy based not only on burning fossil fuels but on using petroleum to make things such as rubber and plastics.

The present system makes sense now because oil costs are so little; a sustainable system like the artificial or bionic leaf can’t compete with that.

When oil becomes scarce, he says, “We might want to redo everything regarding manufacturing. In the future, you ought to make everything renewable.”