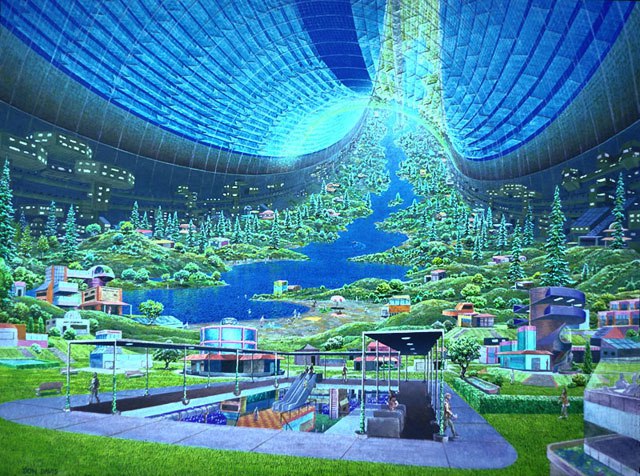 Gerard K. O’Neill’s name might not ring a bell for many of us, but he certainly is one of the most significant names in the world of physics and space sciences.

Gerard was an American physicist whose ideologies resonated with the concept of Space Manufacturing and Space Colonization as early as 1969.

He visualized establishment of a space manufacturing facility that would produce end products for use in the outer space.

In the paper, Gerard spoke about the concept of space colonization and how it would help us solve at least five of the most pressing problems the world faces.

In the paper titled The Colonization of Space, Gerard argues that the concept could help us by “Bringing every human being up to a living standard now enjoyed only by the most fortunate; protecting the biosphere from damage caused by transportation and industrial pollution; finding high-quality living space for a world population that is doubling every 35 years; finding clean, practical energy sources; preventing overload of Earth’s heat balance.” Little did we know that Gerard’s vision could be simplified using another groundbreaking technology, 3D Printing.

The 3D printing industry is quickly building on its already impressive reputation.

3D Printing is known to be able to produce anything ranging from automotive parts, plastic plates, prosthetic limbs and even electronic devices, thus disrupting a broad spectrum of industries.

Characterized by a slow growth rate over the last three decades, 3D printing has grown from a hobby to a commercial application.

3D printing has now been claimed to be the go-to tool for Space Colonization.

Since the advent of the 3D print technology, designers and manufacturers have used it to build prototypes.

NASA scientist, Behrokh Khoshnevis has been working on the idea of 3D printed buildings using concrete and plans to continue researching the idea in space.

‘Contour Crafting’ works the same way as conventional 3D printing works, except that the printers are massive in size and extrude concrete instead of plastic.

The CC enabled 3D printer is mounted on an elaborate, six-meter-tall gantry resembling an oversize sawhorse and extrudes layers of concrete sequentially, as per the design directed.

Behrokh’s 3D printer is not the only attempt made. However, it seems to be the most attractive and feasible one.

In-space manufacturing techniques would require only 3D printers and a mining device to extract material from the celestial surfaces.

Using in-situ fabrication, we not only combat the risky task of pre-planning and pre-fabrication requirements but also make value out of the space material debris.

The astonishing speed at which buildings are ‘printed’, this process can abort wasteful practices of the construction industry.

We thus see that 3D printing conforms to all three requirements of the economic rationale of a space manufacturing facility as proposed by O’Neill viz.

Energy, as the 3D printer would be operated on energy sources available at the site like solar power, materials as there is a judicious utilization of available resources at the celestial site and free space.

As we know, every methodology comes with its set of constraints; 3D printing is not an exception.

Experiments are on, and it is said that 3D printing will be able to overcome the issue of gravity smoothly and in turn convert it to an advantage, as 3D printed building will not have to withstand the gravitation pressure.

The uncertainty of the properties of the celestial raw materials would be another glitch as one would not be aware of the consistency, binding properties and other characteristics of the materials available on-site.

With additive feeds to the materials accessible on the spatial surfaces, one could bind and strengthen the built structures.

Technology undoubtedly has appalled us with its ability to do the unimaginable, and Space Colonization using 3D printing is one of the far-fetched human ideas that can well be true.

The apparent correlation between these two groundbreaking technologies might not only make human settlements in the outer space possible but also help humankind attain incredible success in the field of science.