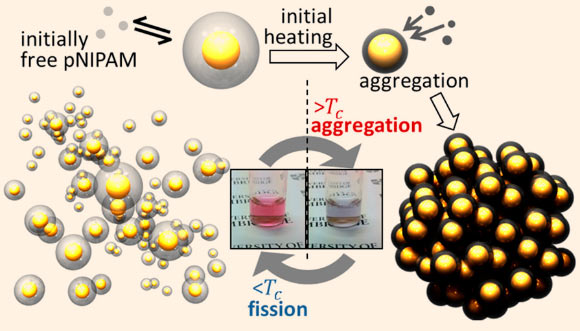 A team of researchers at the University of Cambridge, UK, has developed a nanoscale engine, just a few billionths of a meter in size, which uses light to power itself.

The prototype nano-engine is made of small charged particles of gold, bound together with temperature-responsive polymers in the form of a gel.

When the engine is heated to a critical temperature with a laser, it stores large amounts of elastic energy in a fraction of a second, as the polymer coatings expel all the water from the gel and collapse.

This triggers a controllable number of gold nanoparticles to bind tightly in clusters.

When the device is cooled, the polymers take on water and expand, and the gold nanoparticles are vigorously and quickly pushed apart, like a spring.

“It’s like an explosion. We have hundreds of gold balls flying apart in a millionth of a second when water molecules inflate the polymers around them,” said team member Dr. Tao Ding, lead author on a paper published this week in the Proceedings of the National Academy of Sciences.

“But now we can use light to power a piston engine at the nanoscale.”