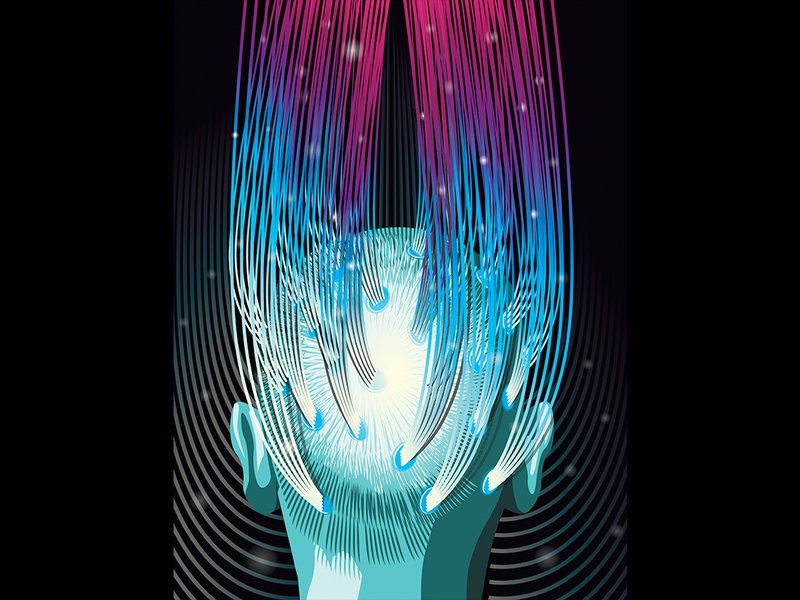 Two hundred and thirty-five years after the Italian scientist Luigi Galvani reported that dismembered frog legs twitch in response to a static charge applied to a nerve, we are still exploring the mysteries of what he called “Animal electricity,” especially in the brain.

Aron Barbey, a neuroscientist, is the director of the University of Illinois’ Decision Neuroscience Laboratory at the university’s Beckman Institute for Advanced Science and Technology, and his experiments appear to point to a time when students, soldiers, executives and the elderly could all benefit from a treatment called transcranial direct-current stimulation.

It’s not hard to understand why the Air Force would be interested in what Barbey has to offer.

In a series of studies published since 2013 in NeuroImage, Brain Stimulation, and other journals, tDCS alone was shown to reduce fatigue and improve or preserve performance.

McKinley, who has been working with tDCS since 2007, says the effect of a 30-minute tDCS dose of two milliamperes in the morning “Lasts all day long.” In a related, yet-to-be-published AFRL sleep deprivation study, subjects were kept awake for 21 hours, then given either caffeine, sham tDCS or actual tDCS before continuing their duties for up to another 15 hours.

The protocol Barbey has designed combines tDCS, nutrition, and cognitive and physical exercise in a comprehensive regimen with the potential to enhance everything from math skills to abstract reasoning.

In what might be considered his lesion-mapping masterwork, published in the journal Brain in April 2012, Barbey and colleagues ambitiously laid out an architecture for general intelligence and executive function-complex, goal-directed behaviors that involve widely distributed parts of the brain, including the prefrontal cortex.

That study, one of the largest and most comprehensive assessments of its kind conducted to date, involved 182 Vietnam veterans and concluded that intelligence “Reflects the ability effectively to integrate verbal, spatial, motor and executive processes via a circumscribed set of cortical connections.” Barbey and his team were able to pinpoint many of these connections and describe how they worked.

“We spend all this time developing these theories and thinking about the nature of the human mind and working hard to try to understand the function of these brain networks. And it becomes this very scientific, very technical enterprise. But then, once you begin working with individuals, working with patients, with Vietnam veterans, it becomes immediately apparent that there is this critical issue at stake. And it is about improving the quality of people’s lives, and finding solutions to these very hard problems that they are facing.”

Stimulating the correct networks, Barbey says, depends on knowing which ones are involved in a given task and being able to target those networks at the proper dose and duration.

In a typical tDCS experiment targeting the central executive network, Barbey arranges the electrodes to send the current through the frontal and parietal lobes as his subjects perform a computer-based task.

Barbey says the electrical current enhances the excitability of the neurons involved in the task, making them more likely to fire and strengthening the synaptic connections between them.

In a September 2015 paper, the AFRL scientist Ryan Jankord and colleagues reported that 30 minutes of tDCS in rats “Induced a robust enhancement” of the connections between cells in the hippocampus that are critical for learning and memory.

In humans, tDCS also appears to recruit additional neurons not initially involved in a task, creating what Barbey calls sub-networks that improve performance.

“It’s only effective under specific conditions, where you are delivering electric current to regions that are involved in the task.” This is an essential part of how he administers tDCS: The subject has to be actively using the parts of the brain in question.

Research by the Air Force, unrelated to clinical disorders, may point to another potential benefit of therapeutic tDCS: Teams of researchers in Germany, Brazil, and the U.S. have found that two weeks of daily tDCS can result in weeks or even months of improved performance on a very specific task.

Barbey’s lab launched the program in 2014, with $12.7 million in funding from the Office of the Director of National Intelligence.

Exercise might seem low-tech compared with tDCS. But Barbey is just as interested in the power of sweat as he is in the potential of electricity.

Though Barbey says, the definitive clinical trial remains to be done, more than 40 years of research show an increase in gray matter volume among aerobically fit older adults, as well as a 40 percent reduced risk of cognitive decline among those who exercise regularly.

“If we were to go outside right now and run at full speed all the way down to the end of the street and then run full speed all the way back,” says Barbey, “When we sat down here to continue our conversation we would be more attentive, our memory would be improved, we would have better executive control functions, and those effects would last about 20 to 30 minutes.”

Barbey also wants to understand the impact of nutrition on brain health and cognition.

The formula is proprietary, but Barbey says it includes ingredients to promote muscle strength, cardiovascular health, and aerobic fitness, as well as brain health.

“But we’re still learning about these methods, and we’re still running experiments to evaluate their efficacy. So it’s still too early. And that’s what happens with commercialism. They go way too fast.” Barbey holds an overall dim view of the commercial brain-training industry and doesn’t want people to lump his work in with its offerings.