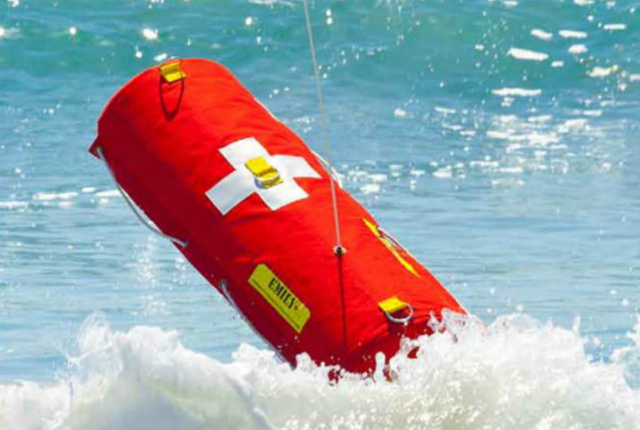 It may look like a huge duffel bag, but EMILY will surprise you.

This Emergency Integrated Lifesaving Lanyard is a state-of-the-art, tough-as-nails robotic lifeguard, with some pretty impressive missions under its belt.

The 25-pound, four-foot-long EMILY device is made of a high-tech core surrounded by a bright, buoyant jacket.

“The devices can be thrown off a helicopter or bridge and then driven by via remote control to whoever needs to be rescued.”

Mulligan first envisioned EMILY as an unmanned aerial vehicle that could monitor the effects of Navy sonar testing on whales.

So Mulligan put aside his sonar project and converted his UAV prototypes into military surveillance drones called Silver Foxes.

Ten years later, the Navy granted Mulligan fresh funding to take apart existing Silver Foxes and use their parts to build unmanned surface vehicles, with an eye to weather monitoring and search-and-rescue missions.

In the last few years, Mulligan and his company have sent more than 260 EMILY robots to navies, coast guards, and search-and-rescue units in South Korea, Indonesia, Singapore, the United Kingdom, France, Mongolia, Brazil, Mexico, and Greece.

EMILY recently proved its mettle in the waters off the Greek island of Lesbos, where operators were able to use EMILY to rescue nearly 300 Syrian refugees from drowning.