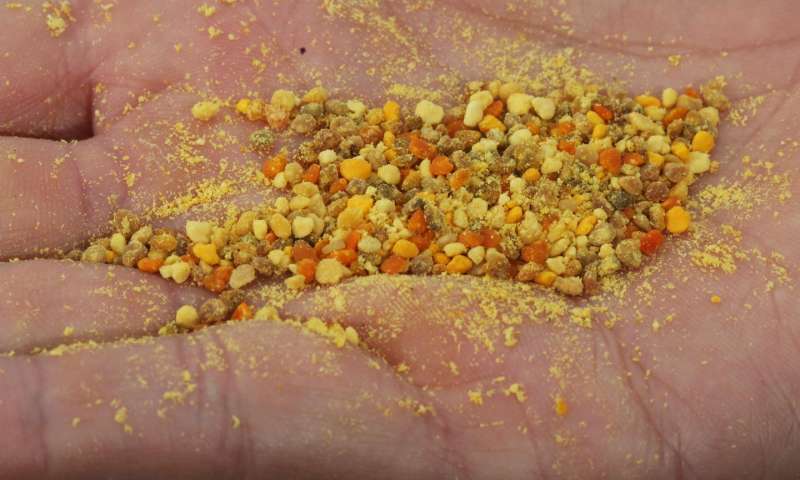 A Purdue University study shows that honeybees collect the vast majority of their pollen from plants other than crops, even in areas dominated by corn and soybeans, and that pollen is consistently contaminated with a host of agricultural and urban pesticides throughout the growing season.

Christian Krupke, professor of entomology, and then-postdoctoral researcher Elizabeth Long collected pollen from Indiana honeybee hives at three sites over 16 weeks to learn which pollen sources honeybees use throughout the season and whether they are contaminated with pesticides.

The pollen samples represented up to 30 plant families and contained residues from pesticides spanning nine chemical classes, including neonicotinoids, conventional corn and soybean seed treatments that are toxic to bees.

The highest concentrations of pesticides in bee pollen were pyrethroids, which are typically used to control mosquitoes and other nuisance pests.

“Although crop pollen was only a minor part of what they collected, bees in our study were exposed to a far wider range of chemicals than we expected,” said Krupke.

“The sheer numbers of pesticides we found in pollen samples were astonishing. Agricultural chemicals are only part of the problem. Homeowners and urban landscapes are big contributors, even when hives are directly adjacent to crop fields.”

Long, now an assistant professor of entomology at The Ohio State University, said she was also “Surprised and concerned” by the diversity of pesticides found in pollen.

The study suggests that overall levels of pesticide exposure for honeybees in the Corn Belt could be considerably higher than previously thought, Krupke said.

Few studies have examined how non-crop plants could expose bees to other classes of pesticides.

The samples showed that honeybees collect the overwhelming majority of their pollen from uncultivated plants, particularly the plant family that includes clover and alfalfa.

“These findings illustrate how honeybees are chronically exposed to numerous pesticides throughout the season, making pesticides an important long-term stress factor for bees,” Long said.

Of the insecticides, neonicotinoids and pyrethroids were the most prevalent in the pollen samples and posed the highest risks to bees, Krupke said.

Conversely, pyrethroids are typically used where pollinators are likely to be, near homes and gardens with a diversity of flowering plants, potentially exposing bees to higher levels of chemicals and on a more frequent basis.