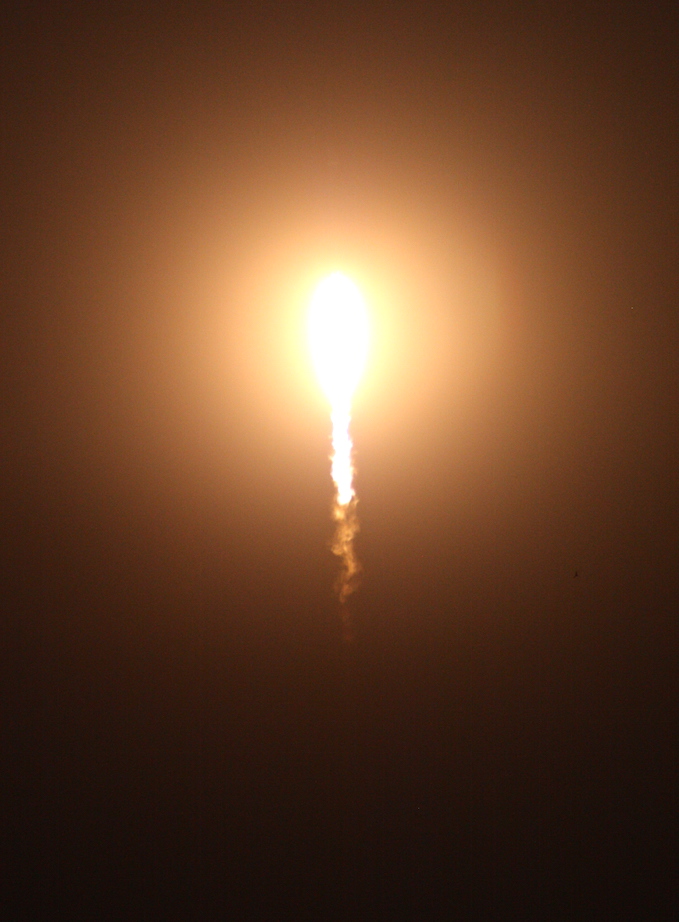 A Japanese communications satellite rode a Falcon 9 rocket into space from Cape Canaveral, reaching an on-target orbit as the launcher’s first stage booster nailed a high-speed landing on a platform in the Atlantic Ocean, logging another achievement for SpaceX’s cost-cutting reuse initiative.

The rocket achieved its primary and secondary objective on Friday’s launch, placing the JCSAT 14 communications satellite into orbit, and returning its booster stage to a purely experimental landing on a specially-outfitted ship floating in the Atlantic Ocean.

The 229-foot-tall Falcon 9 lit its nine Merlin 1D first stage engines, throttled up to 1.5 million pounds of thrust, and climbed away from Cape Canaveral’s Complex 40 launch pad at 1:21 a.m. EDT Friday, May 6.

Lighting up a starry sky over the Central Florida marshlands, the Falcon 9 pivoted east from its launch pad, its blazing orange exhaust extending hundreds of feet behind it in a spectacle easily visible across the region.

The Falcon 9’s single-engine second stage, fitted with an ultra-thin nozzle extension for better performance in the airless vacuum of space, ignited moments later to continue driving into orbit with the JCSAT 14 communications satellite, a new broadcasting platform for Tokyo-based Sky Perfect JSAT Corp. Around the same time, cold gas nitrogen thrusters on the first stage flipped the 15-story booster around and pointed it tail first, beginning a sequence of maneuvers to land the rocket on an ocean-going platform in the Atlantic Ocean.

SpaceX said before Friday’s launch that a successful landing was unlikely because “The first-stage will be subject to extreme velocities and re-entry heating,” more severe conditions than the Falcon 9 encountered on its last launch.

Live video from the drone ship and a nearby boat showed the Falcon 9 rocket illuminating the vessel’s deck, about the size of a football field, as the booster approached the platform, dubbed “Of Course I Still Love You” after a sentient planet-sized starship in Iain Banks’ sci-fi novels.

The booster’s intact recovery gives SpaceX a 3-for-7 record in its vertical landing attempts, which began in January 2015 with a crash landing on the drone ship.

Engineers resolved several problems that plagued the new recovery maneuvers, including an insufficient supply of hydraulic steering fluid, a stuck engine valve, and a disjointed landing leg, before logging the first successful touchdown at sea April 8 after a launch with a Dragon supply ship heading for the International Space Station.

SpaceX has three previously flown Falcon 9 boosters in stock now, including one that returned to landing at Cape Canaveral in December, with plans to fly one of the vehicles a second time this summer.

“It’ll still take us a few years to make it smooth and make it efficient, but I think it’s proven that it can work,” Musk told reporters in an April 8 press conference after SpaceX’s first rocket landing at sea.

Valued at approximately $200 million, including the cost of the spacecraft and launch services, the JCSAT 14 satellite will broadcast from 154 degrees east longitude, where it will hover over a fixed location on the equator to extend and replace service currently provided by JCSAT 2A, a platform launched in 2002, nearing the end of its life.

Once operational, officials plan to rename the new craft JCSAT 2B. Hosting Ku-band and C-band transponders, the satellite will serve television broadcast, data networking and airborne and maritime Internet connectivity markets across Asia, Russia, Oceania and the Pacific Islands, according to SKY Perfect JSAT.

SpaceX has up to four more Falcon 9 flights planned before the end of June, three from Cape Canaveral and one from Vandenberg Air Force Base in California, as the launch provider ramps up its mission cadence.

GizmoCrazed - January 24, 2012 0
According to a video released by Hacktivist group Anonymous, they are planning to take down Facebook on January 28. This comes after shutdown of popular file-sharing...

'Heartbeat' Bills Get the Science of Fetal Heartbeats All Wrong

What Would Happen To Your Body In Space Without A Spacesuit?