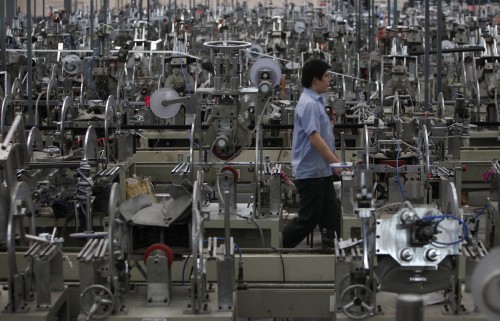 Across the manufacturing belt that hugs China’s southern coastline, thousands of factories like Chen’s are turning to automation in a government-backed, robot-driven industrial revolution the likes of which the world has never seen.

By the end of this year, China will overtake Japan to be the world’s biggest operator of industrial robots, according to the International Federation of Robotics, an industry lobby group.

The pace of disruption in China is “Unique in the history of robots,” says Gudrun Litzenberger, general secretary of the IFR, which is based in Germany, home to some of the world’s leading industrial robot makers.

China’s technological transformation still has far to go – the country has just 36 robots per 10,000 manufacturing workers, compared with 292 in Germany, 314 in Japan and 478 in South Korea.

From the 1980s onwards, as Beijing’s Communist rulers opened up to global trade, the country’s huge, cheap workforce helped make it the world’s biggest exporter of manufactured goods.

Breakneck economic growth lifted hundreds of millions of Chinese out of poverty and transformed swaths of the country, as workers migrated from the countryside to the city.

Partly because of the one-child policy, formally phased out in 2015, China’s working-age population is expected to fall from one billion people last year to 960 million in 2030, and 800 million by 2050.

In recent years, China’s central planners have been promoting automation as a way to fill the labour gap.

They have promised generous subsidies – to be doled out by local governments – to smooth the way for Chinese companies both to use and build robots.

“Our country will be the biggest market for robots,” he said in a speech to the Chinese Academy of Sciences, “But can our technology and manufacturing capacity cope with the competition? Not only do we need to upgrade our robots, but we also need to capture markets in many places.”

The march of the machines, not just in China but around the world, has been accelerated by sharp falls in the price of industrial robots and a steady increase in their capabilities.

The stereotypical image of China’s factories can still be found in many places; tens of thousands of people in long lines hunched over sewing machines or slotting components into a printed circuit board.

The piece nicely supports what I have been writing about trade, China, and automation.

Trade barriers or trade conflicts or tougher negotiations aren’t going to “Bring the jobs back.” That’s nothing but economic nostalgia.