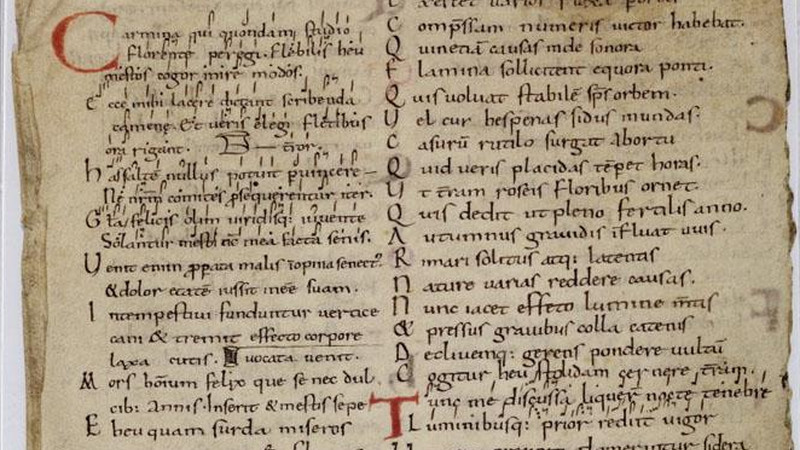 Such was its importance, it was translated by many major figures, including King Alfred the Great, Chaucer and Elizabeth I. Hundreds of Latin songs were recorded in neumes from the 9th through to the 13th century.

Because these aural traditions died out in the 12th century, it has often been thought impossible to reconstruct ‘lost’ music from this era – precisely because the pitches are unknown.

Now, after more than two decades of painstaking work on identifying the techniques used to set particular verse forms, research undertaken by Cambridge University’s Dr Sam Barrett has enabled him to reconstruct melodies from the rediscovered leaf of the 11th century ‘Cambridge Songs’.

“This particular leaf – ‘accidentally’ removed from Cambridge University Library by a German scholar in the 1840s – is a crucial piece of the jigsaw as far as recovering the songs is concerned,” said Dr Barrett.

Part detective, part musical time traveller, Barrett’s scholarly groundwork has involved gathering together surviving notations from the Cambridge Songs and other manuscripts around the world and then applying them to the principles of musical setting during this era.

Bagby, co-founder of Sequentia, is also a director of the Lost Songs Project which is already credited with bringing back to life repertoires from Beowulf through to the Carmina Burana.

Working step-by-step, and joined recently by another member of Sequentia, the harpist-singer Hanna Marti, songs from The Consolation of Philosophy have now been brought back to life.

During the Middle Ages, until the end of the 12th century, it was common for great works such as Boethius’ to be set to music as a way of learning and ritualising the texts.

There have been other attempted settings of The Consolation of Philosophy across the centuries; especially during the renaissance and the 19th century when melodies were invented to sound like popular songs of the day.

It was the rediscovered leaf of the Cambridge Songs that allowed the crucial breakthrough in being able to finally reassemble the work as it would have been heard around 1,000 years ago.

Originating in the Rhineland in the first half of the 11th century, the Cambridge Songs makes up the final part of an anthology of Latin texts that was held in Canterbury before making its way to Cambridge University Library by the late 17th century.

Gibson then got in touch with Cambridge University medievalist Christopher Page, then a PhD candidate, who realised this was the missing leaf from the Cambridge Songs and secured its return to the city nearly a century and a half after its disappearance.

Saturday’s performance, ‘Songs of Consolation from Boethius to the Carmina Burana’, takes place at Pembroke College Chapel from 8pm-9.30pm. Tickets are £20, £15 and £5 for students and are available from songsofconsolation.