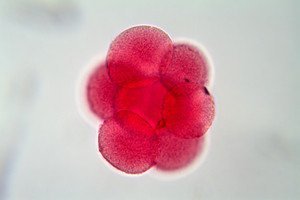 Scientists at Northwestern University 3D printed a functional ovary out of Jello-like material and living cells.

When implanted into mice that had their ovaries removed, the moms regained their monthly cycle and gave birth to healthy pups.

The ovary milieu, a niche of hormone-releasing cells and other structures that help nurture the eggs, also begins to decay, making it harder for ovaries to release eggs on schedule.

For the implant to properly work, it needs three things: immature egg cells, hormone-releasing cells that support oocytes, and a flexible but rigid enough scaffold that can support the growth of both cell types.

The design probably worked best because it has multiple anchor points for cells to latch onto and also has a sufficient amount of space for oocytes to grow, explained the team.

Finally, mouse ovarian follicles, ball-shaped units that contain both the oocyte and supporting cells, were seeded onto the scaffold to complete the prosthesis, which was then implanted into female mice that had their ovaries surgically removed.

The first promising sign came when the mice restored their hormonal cycle, suggesting that at least the hormone-producing cells were alive and functional.

It’s an impressive study, but for the implant to work in humans, the technique needs another element: stem cell technology.

Remember, a woman’s oocytes and supporting cells are a central component of the implant, but they’re often too damaged due to age or disease treatments.

The ability to recreate the oocytes and supporting cells has progressed rapidly in recent years, writes Laronda and colleagues in an earlier review paper.

Human iPSCs derived from skin cells can be turned into primordial oocytes and supporting cells that display the same molecular signs of their natural counterparts, although whether they can fully develop remains to be tested.

Going from skin cell to stem cell to reproductive cells may seem like a difficult process, but much of this transformation process relies on physical forces, including the rigidity and structure of the ovary, wrote the authors.

A recent, potentially paradigm-shifting study suggests that women may have egg-making stem cells hidden away in their ovaries well into their 40s.

If, and that’s a big “If“, these cells could be coaxed in a dish to make egg cells, it would mean an unlimited supply of healthy egg cells that could be used to innervate the prosthetic ovary.