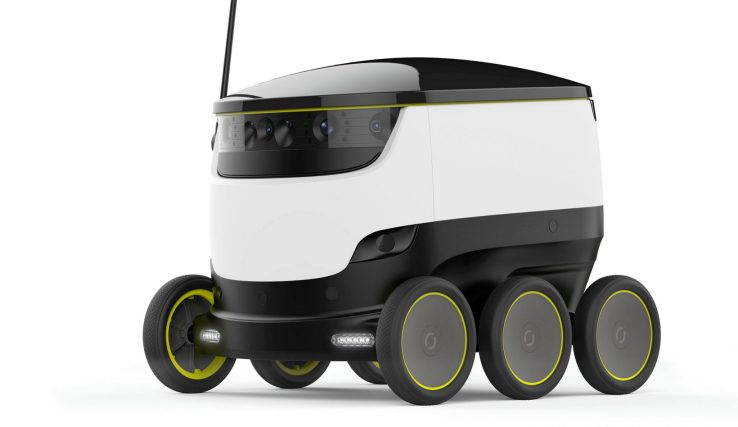 Jeremy Conrad, a founding partner of Lemnos Labs, apparently means what he tweets, having invested in Marble, a new, San Francisco-based ground-delivery robot that will focus on ground-based last-mile delivery for business, then consumer, applications.
He’s hardly alone in thinking that ground robots will be bringing us everything from canned goods to Christmas lights sooner than we think.

This past Wednesday, Andreessen Horowitz announced it had led a $2 million investment in Dispatch, a company whose self-driving ground delivery robots look like minibars on wheels.

Starship, which is a robot resembling the shape of a refrigerator and created by the co-founders of Skype, is also promising to give customers more control over the delivery process.

Whether these new ground-based robot couriers represent the beginnings of a broader trend, or a series of one-off bets remains a question mark.

Amazon’s interest alone in drones means it will be difficult for many related startups to compete on the consumer delivery front.

The FAA is expected to issue rules by the end of June for flying unmanned aircraft that weigh more than 55 pounds, but the proposed rules don’t apply to drones that would eventually handle consumer delivery because they don permit drones to fly at night or beyond an operator’s line of sight.

Though Lemnos Labs helped incubate Airware,  a company that raised $30million recently to sell drone hardware and software to enterprise customers, Conrad goes so far as to call “Drone delivery in cities maybe the dumbest thing I’ve ever heard of. Even if you can get past the safety issues, and you can’t, the idea of 10,000 drones buzzing around is idiotic.”

For starters, consumer-facing ground robots represent new territory for regulators, who haven’t had much reason to consider them just yet.

Even if robotic ground couriers come to be viewed by regulators as friendlier than unmanned aerial vehicles, which seems likely, given they can’t fall out of the sky and onto someone’s head, not everyone agrees that ground-based delivery robots are a huge opportunity.

As happened with air drones, many investors are betting first on industrial applications to see where they might lead.

In the highest profile bet to date, Amazon in 2012 paid $775 million for Kiva Systems, a maker of robots that move items around warehouses.

Entrepreneurs and investors alike are beginning to take more seriously the cost savings that automating direct-to-consumer delivery could produce, too.

“If you have a person in the mix, it’s expensive; you need to have at least two to three deliveries per hour, or you have no business.”

“But it’s early days. It’s like talking about self-driving cars a few years ago. It’s not going to be next year but seven or eight years down the road.”