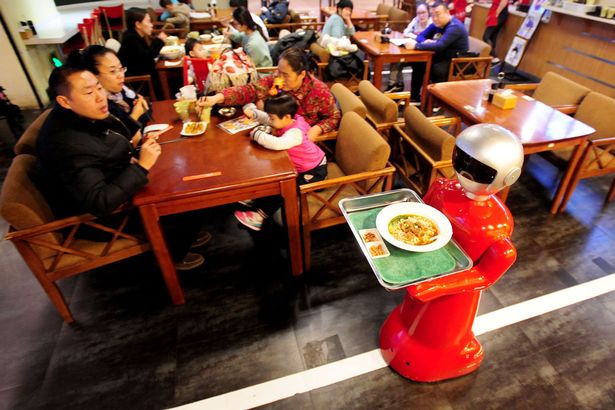 How would you feel about being served food by a robot ?

One restaurant in China has done exactly that – swapping a human waiter for a 140cm-tall robot counterpart.

Using a battery, the robot is capable of serving diners at a restaurant in Shenyang, capital city of China’s Liaoning Province, for up to eight hours.

The robot takes customers their food and drinks and, thanks to a mix of sensors and navigation hardware, is able to avoid spilling anything.

Good for restaurant owners, but not for anyone looking for a job in the catering industry.

Thankfully, tech experts reckon it’ll take a while for robot waiters to replace a human face.

In January, the World Economic Forum estimated that 7.1 million jobs could be lost in the future thanks to redundancy from technology.

Even lofty white-collar jobs might be under threat – not from robots but from artificial intelligence.

“[AI] could potentially see complex jobs that were once thought untouchable taken over by computers thanks to emerging creative mathematical research and advanced massive scale supercomputing to model human brain function,” explained Mr Skilton, who spent 30 years as an IT strategy consultant.

According to Mr Skilton, measures need to be taken now to make sure that robots are a help not a hindrance to the workforce.

“Putting in place controls now could well help economies make sure robots and computers add growth rather than destroy jobs.”