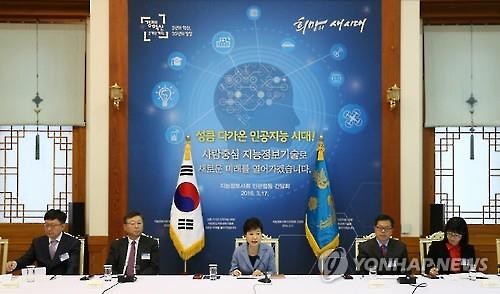 The South Korean government announced Thursday it would spend 1 trillion won by 2020 to boost the artificial intelligence industry.

“Once the private companies set up the research institute, the government will provide financial support for core R&D projects,” the ministry said.

The envisioned facility, tentatively named the Intelligence Information Technology Research Institute, will likely be located in Pankyo, just south of Seoul, according to Kim Yong-soo, a senior ministry official.

The government hopes that it will open as early as possible but the exact timing will be decided by the participating firms, he added.

Under the plan reported to President Park Geun-hye earlier in the day, the government aims to prod the civilian sector into investing 2.5 trillion won over the next five years.

President Park Geun-hye presides over a government-civilian meeting on artificial intelligence at her office of Cheong Wa Dae on March 17, 2016.

The government has come under public criticism that it’s doing little while South Korea lags behind other nations in preparing for the so-called 4th Industrial Revolution.

The global artificial intelligence market was estimated at $127 billion last year, but it could reach as much as $165 billion this year.