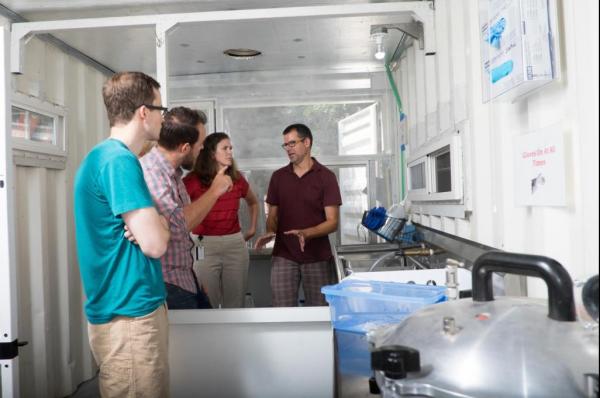 The Sterile Box is a full, solar-powered sterilization facility built into a standard 20-foot steel shipping container that can be set up anywhere, researchers said in a press release.

“Infection control in the surgical suite really is a big challenge in the developing world,” said Maria Oden, director of the Oshman Engineering Design Kitchen at Rice University.

The researchers had previously worked on a standalone device to sterilize tools, but started thinking bigger because of the lack of facilities in rural and developing areas.

In designing the portable facility, the researchers worked to consider water and energy requirements and availability, and wanted to make it easy to avoid human error in construction or use.

“The box looks at the problem from a complete system level and makes it easy to implement,” Oden said.

“It’s not just a simple device to clean and sterilize the tools, but a way to manage the process.”

A non-electric, gravity steam sterilizer, heated with a custom-designed 750-watt hotplate, is used to sterilize instruments.

In a study, published in the journal PLOS ONE, the researchers report instruments were properly decontaminated and sterilized in 61 trials of the Sterile Box between May and August 2015 for a failure rate of 0 percent.

“We laid out the elements to minimize human error and water and energy requirements to the extent that we can. I really like that about our design.”