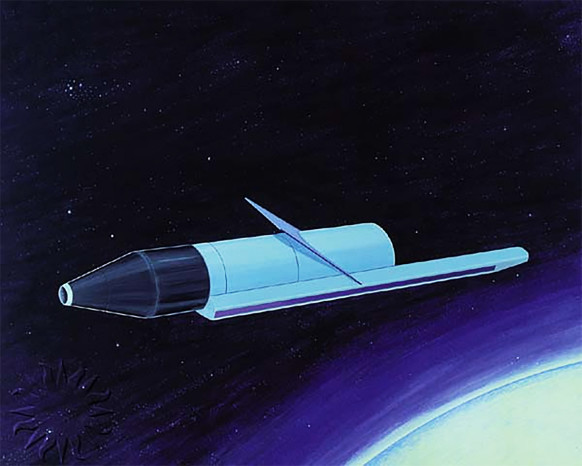 Last week, their national nuclear corporation Rosatom announced it is building a nuclear engine that will reach Mars in a month and a half-with fuel to burn for the trip home.

“A nuclear contraption should not be too far off, not too complicated,” says Nikolai Sokov, senior fellow at the James Martin Center for Nonproliferation Studies in Monterey, CA. “The really expensive thing will be designing a ship around these things.”

Nuclear thermal is but one flavor of nuclear propulsion.

The fastest chemical rockets produce thrust by igniting one type of chemical to burn another, creating thrust.

One pound of the chemical mixture powering the Space Launch System-NASA’s in utero rocket for the agency’s planned mission to Mars-produces about 269 seconds of thrust in a vacuum.

Expensive, but the politics surrounding nuclear make it a harder sell in America, so NASA is stuck with the Space Launch System for now.

The engines the Soviets and Americans were developing during the Space Race, on the other hand, had at least double a chemical rocket’s specific impulse.

Calling for a fission mission to Mars is great for inspiring space dreamers, but Russia’s planned engine could have practical, near-term applications.

Sokov thinks the main rationale for developing a nuclear thermal engine would be to allow for more of these orbital corrections, significantly increasing a satellite’s working lifespan.

Russia may have the will to go nuclear, but it probably lacks the means.

If the Russian Federation does succeed, they won’t be stopped by international treaties-which only apply to nuclear weapons.

Things launched from rockets do not always make it to space, and things in orbit sometimes fall to Earth.