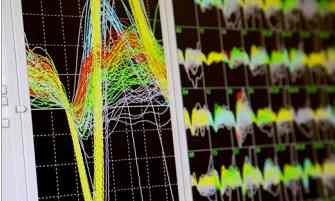 A pair of monkeys have learned to control a robotic wheelchair by thought alone, using electrodes implanted into their brains.

Scientists were able to decode neural signals from the animals and turn these into commands for the wheelchair, allowing the monkeys to drive across a room to retrieve grapes from a dispenser two metres away.

Writing in the journal Scientific Reports, the researchers describe how two rhesus monkeys, known only as “M” and “K“, were able to use a wireless brain implant to control the motion of a robotic wheelchair at speeds of up to 28cm per second.

The researchers implanted electrodes consisting of arrays of flexible hair-like metal filaments in multiple areas of the monkeys‘ primary motor, primary somatosensory and premotor cortices – regions of the brain devoted to processing sensations and to the production of movement.

In the first part of the experiment, each monkey was seated in the wheelchair, which was then programmed to drive towards the grape dispenser parked approximately 2 metres away.

During the process, the researchers recorded the activity in the monkey’s brain, allowing the scientists to correlate signals from the neurons with different motions of the wheelchair.

“We are able to train our computational algorithms to map brain activity to a given trajectory,” says Nicolelis, although he is quick to point out that this doesn’t equate to monkey mind-reading.

“I don’t know what they are thinking, I just know that I can extract information that is useful to control the wheelchair.”

Using the information gleaned from the first set of experiments, the team made the process work essentially in reverse, with the system “Listening in” to signals from each monkey’s brain and turning them into commands for moving the wheelchair.

The scientists found that the monkeys‘ driving skills improved during the three to six weeks of the experiment.

Monkey K went from taking 43.1 seconds to complete the task to a nippy 27.3 seconds.

What’s more, the researchers discovered that, once at the helm of the wheelchair, the pattern of activity of the monkeys‘ neurons changed compared to when they were passengers.

The new study, he says, pushes the possibilities further by focusing on using BMIs to control an abstract tool, like the wheelchair, rather than a prosthetic limb.

“This seems like a slightly far-fetched science fiction thing going on in the lab with monkeys, but there are actually a number of people now who have had very similar implants,” Jackson adds.