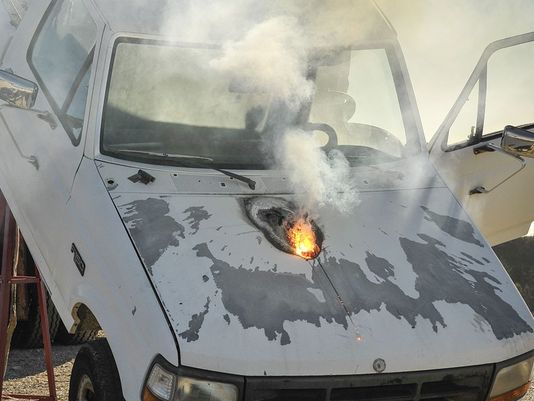 For years, the Pentagon has pursued the dream of directed energy weaponry – laser weapons that could defeat a foe for pennies when compared with the expensive kinetic weapons the department relies on.

The time has finally come where those weapons are capable of being fielded, according to a trio of Lockheed Martin executives who work on the development of the company’s laser arsenal.

In essence, it’s no longer a technological problem to make laser weapons work.

Asked flatly if the services came to them tomorrow and asked for a laser weapon in the 30 KW range to be delivered, the two men, along with Robert Afzal, a senior fellow with Laser and Sensor Systems, agreed they could produce a viable weapon for fielding.

The weapons are limited to the 15-30 KW scale; going much further requires figuring out how to deal with atmospheric interference, an issue which becomes more complicated with weapons mounted on airborne systems.

For the Pentagon, that is particularly key, as it has openly talked about the costs associated with using kinetic weapons to attack small trucks operated by the Islamic State group, commonly known as ISIS or ISIL.

The company has already proven the capabilities of a 30KW weapon with its Athena demonstrator, which last year conducted a series of tests on small unmanned systems from over a mile away.

The same is true for the laser weapons: you add more power slots into the rack and increase its power.

So while the 30 KW weapons may be the ones that are deliverable now, scaling up is more a question of figuring out details than developing a wholescale new technology.

The Navy is using an advanced laser weapon aboard the Afloat Forward Staging Base Ponce, which has been deployed to the Gulf.