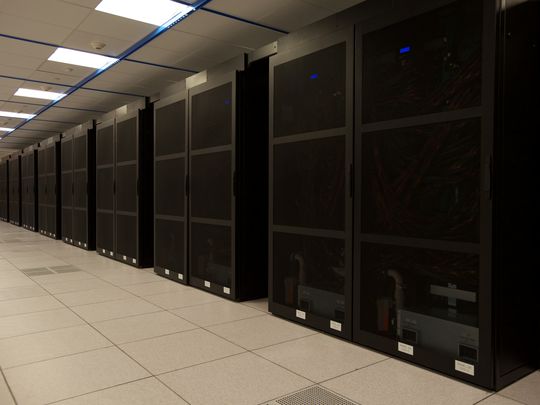 One of the world’s most powerful supercomputers is now being used to forecast weather.

Located in Reston, Va. The computer can process quadrillions of calculations per second that all feed into the nation’s weather forecasts and predictions.

RESTON, Va. – In a nondescript office building here, one of the world’s most powerful weather supercomputers quietly hums on a 24/7 mission to analyze billions of pieces of data that ultimately will tell you whether you need a sweater or sunscreen when you leave the house.

Forecasts, critical not only for your wardrobe choices but for ship captains, airline pilots and shipping companies, depend on sophisticated data crunching and computer models, but three years ago European models delivered a blow to the U.S. weather apparatus.

The European weather models accurately predicted the path and strength of the devastating Hurricane Sandy that hit the New Jersey coastline and caused $65 billion in damage.

Now, the U.S. is on the rebound with this monumental supercomputer that collects, processes and analyzes billions of observations from weather satellites, weather balloons, airplanes, buoys and surface stations from around the world to help meteorologists make better weather forecasts.

NOAA’s purchase of the school-bus size device stemmed partly from competition from the top European weather model – better known in some circles by its acronym ECMWF.

The company is a leading maker of supercomputers worldwide and supplied the ones used by European weather agencies.

The tidal wave of data NOAA sifts through each day is equal to more than twice that contained in the entire printed collection of the Library of Congress, said David Michaud, director of the office of central processing at the National Weather Service, which is part of NOAA.

In this Washington, D.C., suburb, the supercomputer takes in current weather data around the world then uses models and mathematical equations to predict the forecast in the hours, days and weeks ahead. It displays its mission proudly: large photos of lightning bolts, a hurricane, a tornado, a snowstorm and other weather phenomena cover the computer’s surface.

It’s not all about the machines: Meteorologists refine and interpret the computer’s predictions to make timely, accurate and reliable forecasts for specific cities and regions, from day-to-day weather to ferocious hurricanes, tornadoes, floods and blizzards.

In the months ahead, the supercomputer will focus on severe weather, storm surge and river forecasting, just in time for spring’s flood season and summer’s hurricane season.

“We expect to see better forecasts for hurricanes, severe weather, floods and other extreme events this year,” Uccellini said.