The Smog Free Tower has been realized, thanks to crowdfunding in the year gone by.

The project by Daan Roosegaarde is not expected to curb fully the issue of urban air pollution.

Though, it does the job of creating breathable zones in places such as civic spaces like public parks as well as downtown squares.

The 20-foot tower is not only light in size but also boasts a classic design.

It has the ability to carry out its functions using the same amount of energy as that consumed by a water boiler, which is 1,400 watts.

Low energy technology can power the onboard LEDs as well as ionization process with a lot of efficiencies.

These help light up structures with ease and more efficiency each night.

The device is able to suck in smog from the above.

This is done in order to utilize positive current so as to charge the ions upon which the ions cling on to tiny particles of dust. 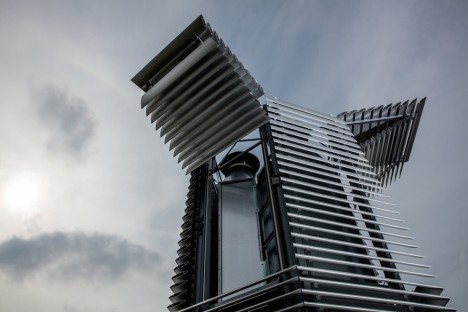 The tower processes particulates which are compressed and subsequently transformed into various forms of jewelry such as cuff links as well as rings.

Also, they can be packed within transparent cubes before they are offered to crowdfunders that continue to like the idea and allow it to grow.

The towers have been planned for installation in cities that specifically require this such as Mexico City, Paris, Los Angeles and Beijing.

The good news is that despite this being the first drop of rain, it promises to bring citizens fresh air to breathe amidst the smog stricken cities.