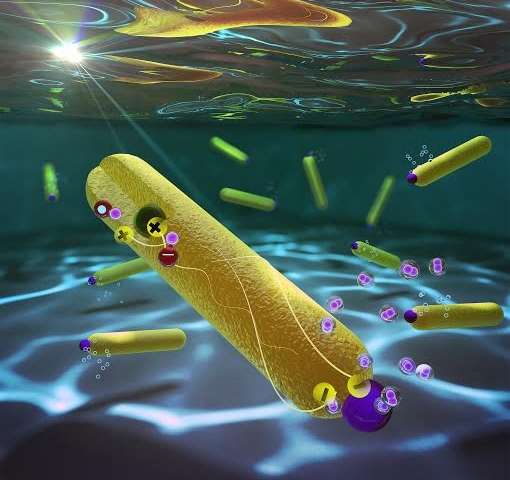 Splitting water is a two-step process, and in a new study, researchers have performed one of these steps with 100% efficiency.

The results shatter the previous record of 60% for hydrogen production with visible light, and emphasize that future research should focus on the other step in order to realize practical overall water splitting.

The main application of splitting water into its components of oxygen and hydrogen is that the hydrogen can then be used to deliver energy to fuel cells for powering vehicles and electronic devices.

The researchers, Philip Kalisman, Yifat Nakibli, and Lilac Amirav at the Technion-Israel Institute of Technology in Haifa, Israel, have published a paper on the perfect efficiency for the water reduction half-reaction in a recent issue of Nano Letters.

“Our work shows that it is possible to obtain a perfect 100% photon-to-hydrogen production efficiency, under visible light illumination, for the photocatalytic water splitting reduction half-reaction. These results shatter the previous benchmarks for all systems, and leave little to no room for improvement for this particular half-reaction. With a stable system and a turnover frequency of 360,000 moles of hydrogen per hour per mole of catalyst, the potential here is real.”

In the oxidation half-reaction, four individual hydrogen atoms are produced along with an O2 molecule.

In the reduction half-reaction, the four hydrogen atoms are paired up into two H2 molecules by adding electrons, which produces the useful form of hydrogen: H2 gas.

In the new study, the researchers showed that the reduction half-reaction can be achieved with perfect efficiency on specially designed 50-nm-long nanorods placed in a water-based solution under visible light illumination.

The 100% efficiency refers to the photon-to-hydrogen conversion efficiency, and it means that virtually all of the photons that reach the photocatalyst generate an electron, and every two electrons produce one H2 molecule.

Another concern is that the cadmium sulfide used in the nanorod becomes corroded under prolonged light exposure in pure water.

“We hope to implement our design rules, experience and accumulated insights for the construction of a system capable of overall water splitting and genuine solar-to-fuel energy conversion,” Amirav said.

“The photocatalytic hydrogen generation presented here is not yet genuine solar-to-fuel energy conversion, as hole scavengers are still required. CdS is unfortunately not suitable for overall water splitting since prolonged irradiation of its suspensions leads to photocorrosion. We have recently demonstrated some breakthrough on this direction as well. The addition of a second co-catalyst, such as IrO2 or Ru, which can scavenge the holes from the semiconductor and mediate their transfer to water, affords CdS-based structures the desired photochemical stability. I believe this is an important milestone.”