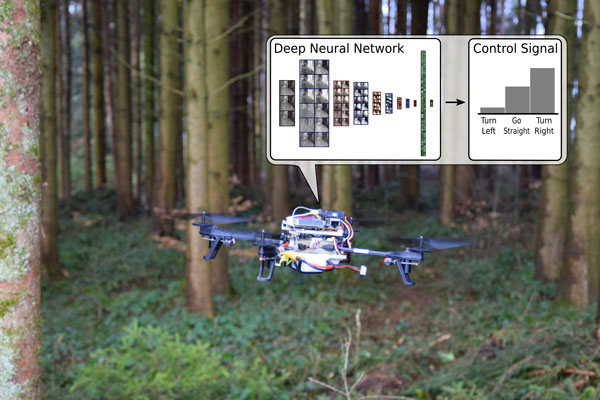 A team of Swiss researchers have taught drones to recognise and follow forest trails.

Drones are an efficient complement to human rescuers and can be deployed in large numbers, are inexpensive and prompt, and thus minimise the response time and the risk of injury for those who are lost or work in rescue teams.

“While drones flying at high altitudes are already being used commercially, drones cannot yet fly autonomously in complex environments, such as dense forests. In these environments, any little error may result in a crash, and robots need a powerful brain in order to make sense of the complex world around them.”, says Prof. Davide Scaramuzza from the University of Zurich.

The drone used by the Swiss researchers observes the environment through a pair of small cameras, similar to those in your smartphone.

Instead of relying on sophisticated sensors, their drone uses very powerful artificial-intelligence algorithms to interpret the images to recognise man-made trails.

If a trail is visible, the software steers the drone in the corresponding direction.

“Interpreting an image taken in a complex environment such as a forest is incredibly difficult for a computer; sometimes even humans struggle to find out where the trail is!”, says Dr. Alessandro Giusti from “Dalle Molle Institute for Artificial Intelligence”.

In order to gather enough data to “Train” their algorithms, the team hiked several hours along different trails in the Swiss Alps and took more than 20 thousand images of trails using cameras attached to a helmet.

The effort paid off: when tested on a new, previously-unseen trail, the deep neural network was able to find the correct direction in 85% of cases; in comparison, humans faced with the same task guessed correctly 82% of the time.

Dr. Dan Ciresan at the Dalle Molle Institute for Artificial Intelligence comments: “In the last eight years we have developed huge Deep Neural Networks to solve difficult problems from the fields of biology, automation and document processing. This is our first attempt at creating a small but performant DNN capable of running on a computer on our drone. I am happy to see that the same networks we have used to analyse biological brains, detect cancerous cells and diagnose retinal disorders can also be used to drive autonomous quadcopters.”

Prof. Juergen Schmidhuber, Scientific Director at the Dalle Molle Institute for Artificial Intelligence says: “Our lab has worked on deep learning in neural networks since the early 1990s when only a few labs were interested in the topic. Today I am happy to find our lab’s methods not only in numerous real-world applications such as speech recognition on your smartphone, but also in lightweight robots such as drones. Robotics will see an explosion of applications of deep neural networks in coming years.”

Prof. Davide Scaramuzza from the University of Zurich says: “Now that our drones have learned to recognise and follow forest trails, our next step will be teach them to recognise humans!”.