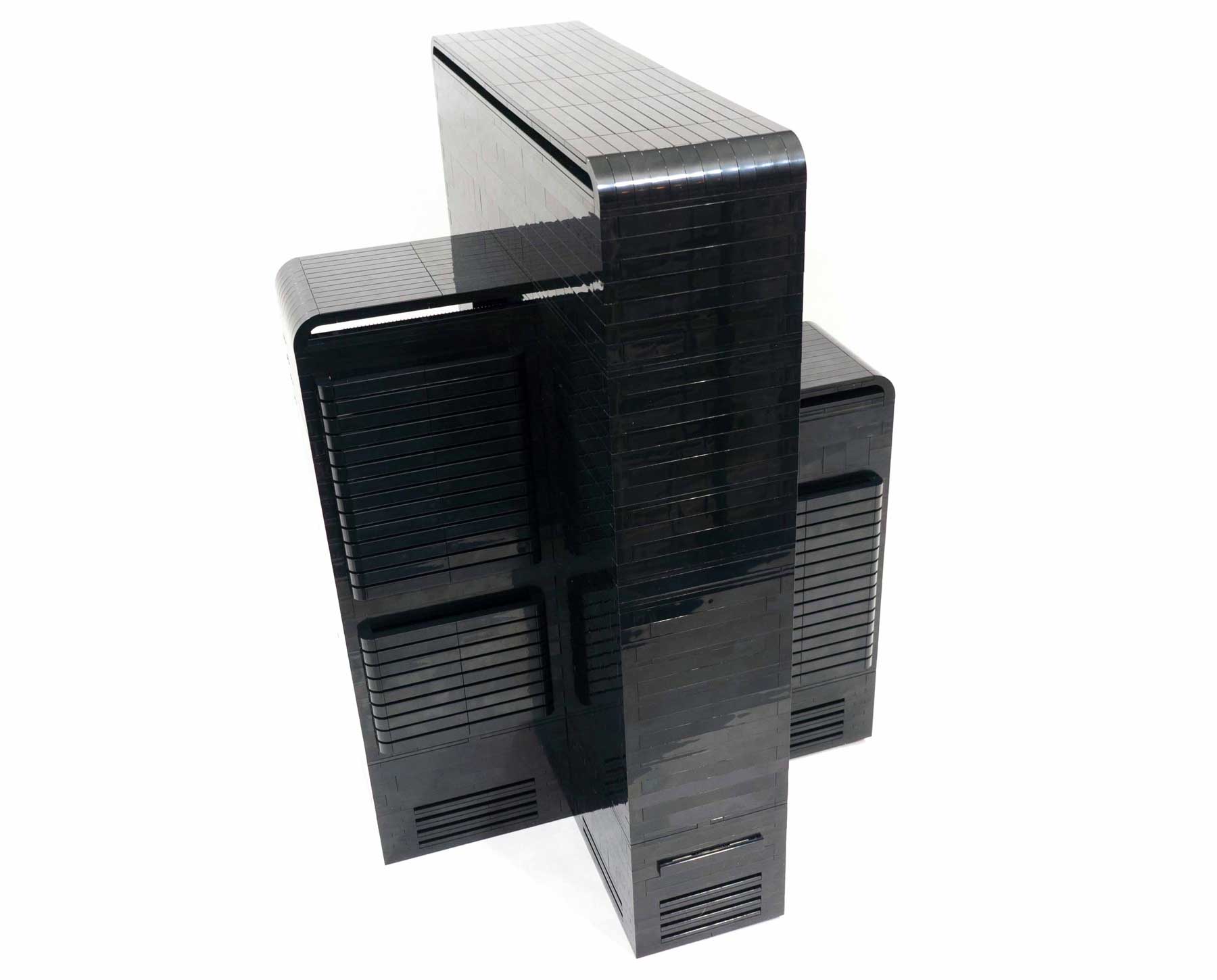 When I first saw this fantastic Lego gaming PC I just thought wow what a great idea and how someone hadn’t thought about doing it before, but then I considered just how difficult it must have been to create.

To construct this beauty Mike Schropp the creator needed around 2,280 LEGO pieces, and In terms of size it stands 19-inches tall by 14-inches wide and deep. But if you’re worried about the strength of the PC case don’t, as Schropp says the case is built sturdily enough that it won’t fall apart when you pick it up as it uses overlapping plates and bricks, along with supports and beams to add stiffness. What’s more if the worst does happen and parts of the case do break Schropp says he’ll repair all the parts that fall apart. 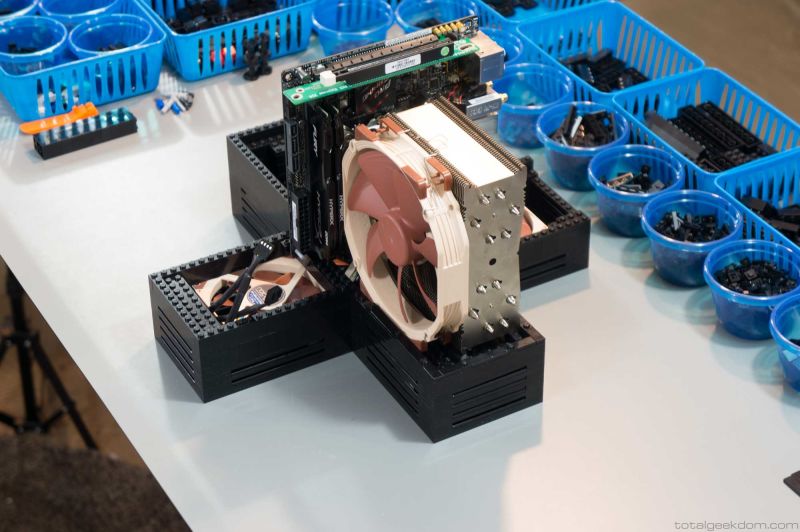 When it comes to design Schropp gave it a distinctive X-shaped finish, but when you go deep into the gaming PC you see that it consists of three different sections. Firstly, in the middle of the gaming PC case sits the Motherboard and Harddrive, and then mounted atop are a trio of system cooling fans why? Well Schropp says this allows for a stream of air to flow over the entire motherboard surface on both the front and the back, cooling the MOSFETs, VRMs, Capacitors, chips, and motherboard PCB itself. Next up is the right hand side section which is dedicated wholly to the CPU cooling. 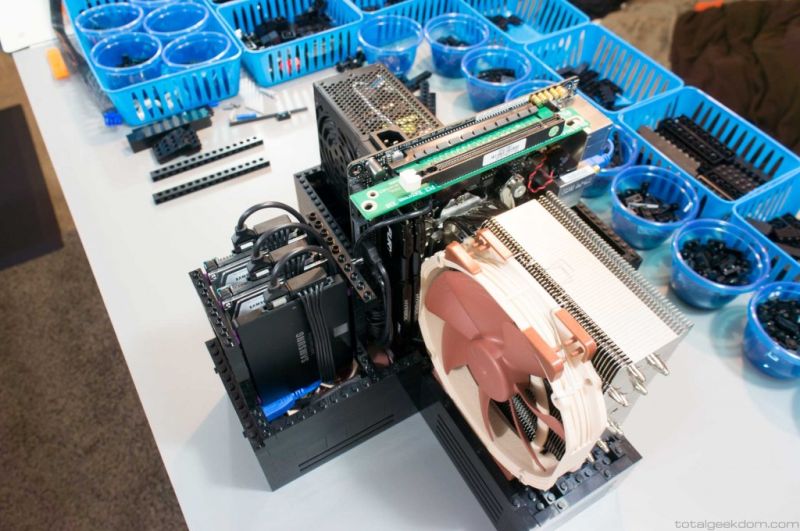 Finally the left hand side which is home to the power supply, and what’s unique about this section is the power supply in the Lego gaming PC gets its own dedicated air intake, built directly above the PSU. What’s more using the extra space above the power supply, Schropp custom-built a billet aluminium heatsink that doubles as a mount for a Noctua tower cooler. If you thinking what about the graphics card? Well, this is mounted on top of the motherboard with a PCIe adapter plate, and due to the Noctua tower cooler the GPU card now runs at 48 degrees Celsius.

Going more into specs the Lego Gaming PC system includes the Asus Z170 ATX gaming motherboard, and is powered by a quad-core 4GHz Intel Skylake Core i7 to give it really power. Alongside this to give it astonishing graphics it features an Nvidia GeForce GTX 980 TI GPU, and has 16GB of HyperX Fury DDR4, and a Samsung 950 Pro M.2 SSD as the primary storage. However if you wanted to you can buy the case and install the components yourself, or there is a cheaper system available for $1,700 which includes a Core i5, 8GB RAM, a Samsung 850 Evo M.2 SSD, and a GTX 950 Graphics card. 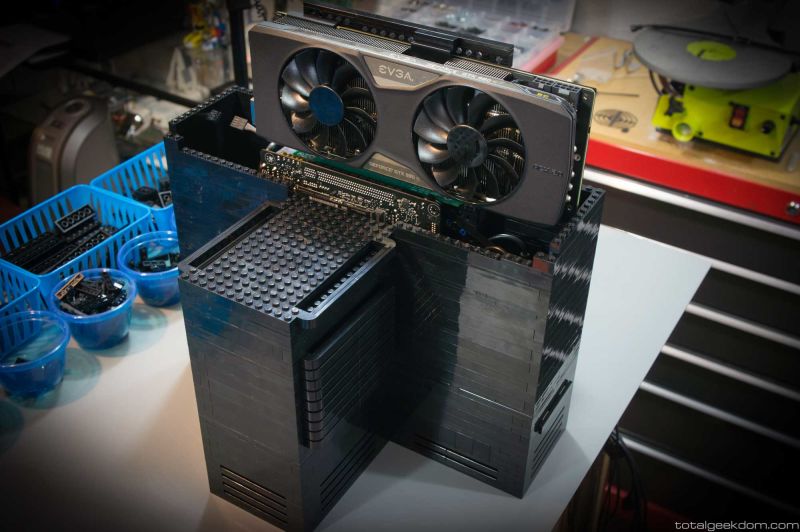 To sum up the Lego gaming PC is an incredible concept that has the ability with its components to rival most top powered gaming PC’s, it’s just the question of will consumers and gamers take to it, and in my opinion I believe they will.

Check out Box.co.uk when you’re looking to purchase any gaming equipment as they have an extensive range of gaming PC’s, gaming laptops, GPU cards, gaming peripherals, projectors and much more all at competitive prices.