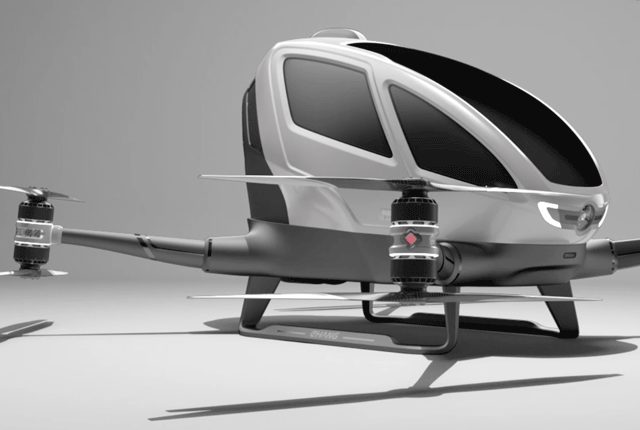 The Chinese dronemaker Ehang, looking to distinguish itself from the crowd (and rival drone giant DJI), has a new product that brings autonomous driving tech and drones together.

It is a single seat, self-driving quadcopter called the Ehang 184.

It looks like an oversized drone with a cockpit stuffed in the middle, a flying analog to the 1,000-horsepower autonomous concept beast that Faraday Future unveiled on Monday night.

Word in the media is that a new drone now allows the delivery of humans as well.

Ehang is a manufacturer of drones and has revealed a new drone that weighs 440 pounds.

The drone, shown at the Consumer Electronics Show (CES), features a cockpit that accommodates only one passenger.

The passenger can be 220 pounds or less in weight for them to be able to fly in the drone.

The drone can reach speeds of up to 63 miles per hour.

The passenger begins their journey by putting in their flight plan.

This is the point when they can guide the drone regarding the timing of take off as well as landing.

Once that is done, the drone can pretty much handle the rest.

The passengers can read using drone’s reading light as they kick back and relax in the cockpit which features an air conditioning.

Passengers need not worry in case of anything going awry as the fail safe system in the drone prompts the system to revert to switch to hover mode.

Otherwise, it could look for a safe zone to land.

The chief marketing officer for Ehang, Derrick Xiong claims that the drone has been used for travel a hundred times.

This involved the delivery of human cargo as well.

However, Ehang 184 has not been legalized in the United States as of now.

Ehang has informed Mashable about their contract with FAA.

The video  of the drone in its flight has been released by Ehang.

Pairing Problems? How to Make Your Smartphone Play Nice with Your Car