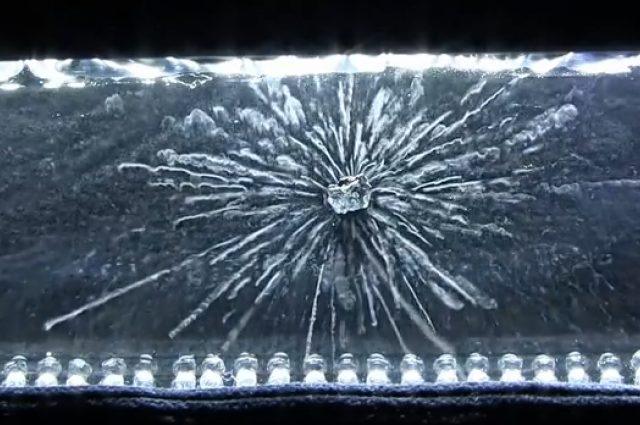 You must have come across news about hazardous effects of radiations on humans, animals as well as the environment. History has it that radiation can make entire cities a disaster and isolated for centuries. In case you are curious as to how that radiation seems like, the folks at CloudyLabs made a video that shows a tiny piece of uranium mineral in a cloud chamber. The sealed glass container cools down to -40 degrees during the process of radiation emission.

CloudyLabs on YouTube that prepared the video show the vapours from alcohol filling the container. Subsequently, they condense on the surface of the glass. CloudLabs explain that this forms a layer of unsaturated vapour that condenses at any random point. As soon as a charged particle passes by the vapour, it has the ability to condense close to the ions existing in the vicinity. A track consisting of alcohol droplets reveals the path of a particle.

By using this kind of equipment one can create various tracks that seem different depending on the pace and mass of the charged particle. The cloud chamber runs for nearly 50 minutes with a Uranium mineral. Once it hits the 40 minute mark, there is not sufficient alcohol required to make fresh trails. As time wears on, the alcohol condenses on the mineral. The small thickness of the liquid atop the mineral is sufficient to absorb part of the energy of alpha particles that exist in the vicinity. The ranges of these vary from 3 to 4cm in the air.