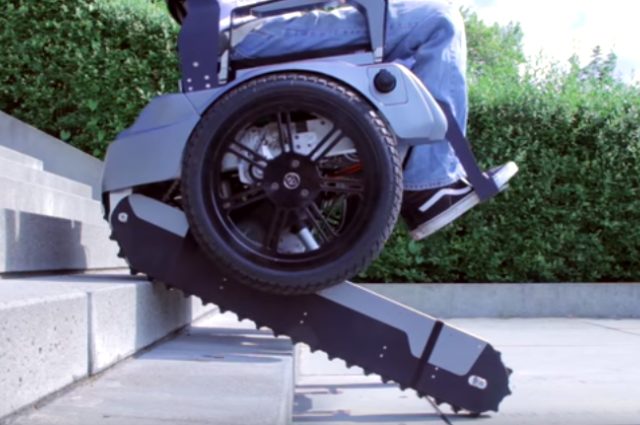 A final year project by a student seems to have the potential to change lives of many disabled folks the world over. Termed Scalevo, this is a mix of a Segway and a wheelchair. The two wheel wheelchair can climb stairs. Courtesy of gyroscopic technology, this wheelchair is akin to a Segway operating in balance mode. Thanks to the design, it can be rotated around in order to quickly change the direction. Infact, it can be moved at a pace of 10 kilometers an hour.

Though, the most fascinating postulate of this wheelchair is that it can climb up and down the stairs with slopes ranging from 17 to 34 degrees. The Scalevo chair drops a couple of treaded tracks and climbs back up the stairs as the user keeps upright throughout the period. Even though it is not apparent in the video demonstrating the chair, the Scalevo chair can climb at a rate of one stair per second. What’s more, it can even scale spiral staircases.

Developed by a total of 10 students studying at the Zurich University of Arts and Swiss Federal Institute of Technology (ETH Zurich). It is a group of industrial designers and engineers that operates under the directorship of Dr. Roland Haas as well as Dr. Roland Siegwart. A mechanical engineering student at the ETH Zurich by the name Miro Voellmy mentioned that it is automated. With the press of a button, it can turn around and have its velocity controlled by the user.

It is important to note that this concept is not entirely new. Johnson & Johnson also designed a stair scaling wheelchair which was termed iBot. Though, the product was not the success that the company wished for it to be. Eventually, it has to be discontinued in 2009 as a result of it being too cotsly. For those who are eager to get their hands on the Scalevo wheelchair will have to wait a bit longer since it is not available in the market yet. Though, a Kickstarter campaign is being considered to create a prototype.