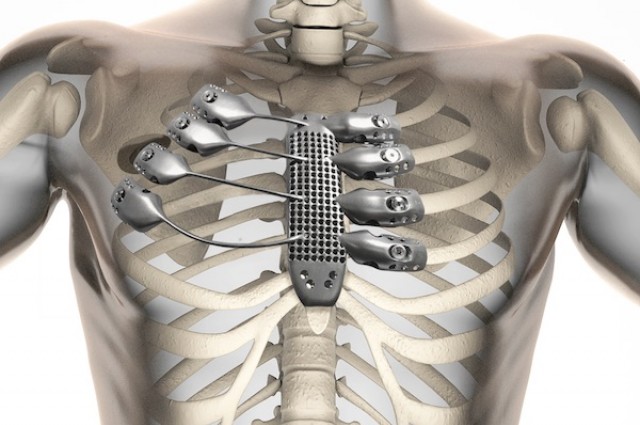 Based in Spain, a patient suffering from cancer just recently got a 3D printed chest prosthetic that has been fashioned from lightweight titanium. The chest prosthetic comprises a sternum and various components of a person’s ribcage. Thus, it was fashioned in such a way that it could fit the person’s chest once specific parts of his body were removed due to the presence of a tumor. The patient is said to be on the road to recovery after he was discharged by doctors following a period of 12 days post-surgery.

The surgical team at Salamanca University Hospital was of the view that the 54 year old patient needed a customized 3D printed prosthetic since the growth of a sarcoma around the patient’s ribcage merited the removal of a significant part of his chest. It is important to note that such an effort can be quite challenging for anyone to pull off. The rather complicated geometry of this part of the body required a prosthetic that had to be specifically designed for this patient. It is not entirely uncommon for thoracic surgeons to incorporate titanium made screws and plates in surgeries. However, such material tends to loosen up as time wears on; thereby, requiring even more surgeries.

Anatomics is a medical device corporation where a team used high resolution CT scanning in order to produce a 3D model of the chest wall as well as the tumor. They managed to create an implant that featured semi-flexible titanium rods as well as a rigid sternal core which played the part of prosthetic ribs as if they were attached to the sternum. The CEO of Anatomics Andrew Batty confirmed that such a thing would enable surgeons to plan surgeries in advance and account for any measurements as well as any estimates involved.

The sternum and ribcage were subsequently printed by CSIRO in Australia with the help of surgical grade titanium alloy. Alex Kingsbury from CSIRO explained that the printer works once an electron beam is directed at some titanium powder in an attempt to melt it. Upon repeating the process, the product is built one layer after another until it results in a full implant.

Top 10 Things You Might Not Know About Steve Jobs

GizmoCrazed - October 8, 2011 5
Steve Jobs, the wizard who transformed the Tech industry and the founder of Apple Inc. has died last year at the age of 56 after a long...

Top 10 Electricity Providers in US

10 Most Annoying Facebook Statuses That Need To Stop Right Now