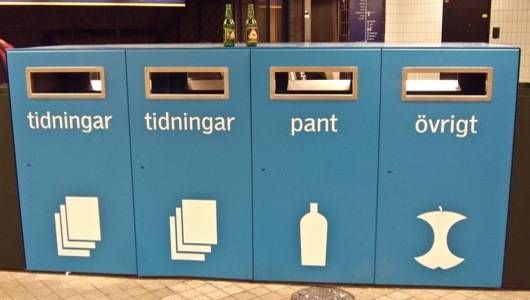 It turns out that Sweden has finally run out of garbage. The reserves of rubbish in the land of over 9.5 million people have been depleted and the landfills seem to have been exhausted. On the face of it, it must sound very pleasing and positive news to you. However, Sweden has been forced to import garbage from countries such as Norway as a result. To be more precise, 80,000 tonnes of garbage is annually imported.

It is no surprise that Sweden attaches a lot of importance with recycling. Thus, merely four percent of the entire rubbish produced in the place is landfilled. It was all fine and dandy until these recycling habits began to give rise to some other problems. Actually, the Swedes depend on rubbish to provide necessities like electricity and heat to a number of house, courtesy of the waste-to-energy incineration program.

As many citizens now fall short of generating sufficient rubbish for the program, Sweden has been forced to set its sights on neighboring countries for help in the matter. The senior advisor of the Swedish Environmental Protection Agency also stressed that the overall capacity of fuel exceeded the production of garbage in the country which can be utilized for incineration. To most Americans, depletion of garbage might sound ridiculous given that the U.S. is overflowing with landfills.

The senior advisor of the program believes that importing waste from Norway is a short term solution to this problem. She believes that this could greatly benefit the Swedes in the sense that Norway would pay Sweden for the waste. In addition, the Swedes would burn the garbage for electricity and heat while the ashes that are left behind will be exported to Norway to be landfilled. To be honest, that is one sweet deal.

The senior advisor does have her reservations about Norway being the trading partner in this particular scheme. She is of the view that it would be better if this deal was struck with Bulgaria, Itlay or Romania where most rubbish is landfilled and neither of them have any incineration plants.