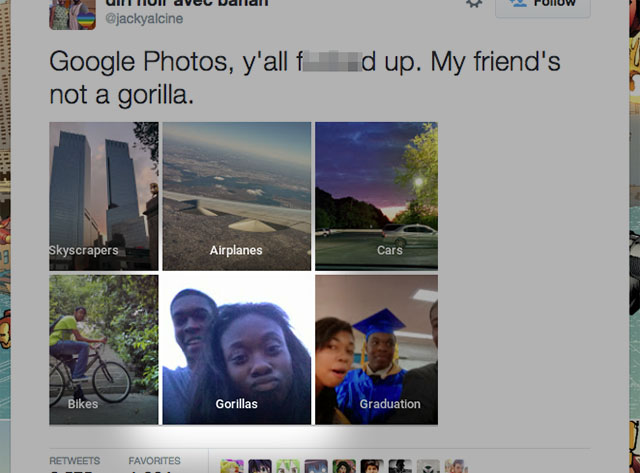 A new Photos app by Google labelled a black couple as a couple of gorillas by mistake. Google has been appalled by this unfortunate incident and has wiped the gorilla label completely from the new app. The app usually makes use of artificial intelligence software to tag each photo that is uploaded by users. When Kacky Alcine, a software developer in New York, suffered from this incident, he took his case to Twitter: “What kind of sample image data you collected that would result in this son?”

Once this was publicized, users on the social media poured in to criticize Google for the racist label. The Photos app was released by Google this past May. Once it assigns labels to the objects in a photo, it arranges each of the images in albums. As more and more data is fed into the system, machine learning enables it to recognize objects better each time. Users have the allowance to wipe incorrect labels assigned to a photo if they so desire. This allows the system to improve over time.

Google states that it is now working on long term solutions and better wording of labels alongside enhanced recognition of dark skinned faces. Previously, there were problems with the app tagging dogs as horses. Understandably, Google recognizes this latest incident as a more serious bug. A spokesperson for Google was also astonished by the latest happening and assured users that Google would do its utmost to prevent any such happenings in the future.

Clearly, Google would need to fine tune its labelling system better than ever before since incidents with racial connotations can turn out to be quite serious in this day and age. Mr. Zunger explained that Google had already been vigilant to prevent any more similar incidents with such racial implications. Now if you wish to remove a tag on your photo, simply click on the photo you wish to to remove, select delete the label and the system will learn never to include it in the search ever again.

GizmoCrazed - January 27, 2018 0
From the furore engulfing the FCC this last year you might think that the agency had accomplished little but appalling privacy advocates and dancing...

This Optical Illusion Could Help to Diagnose Autism