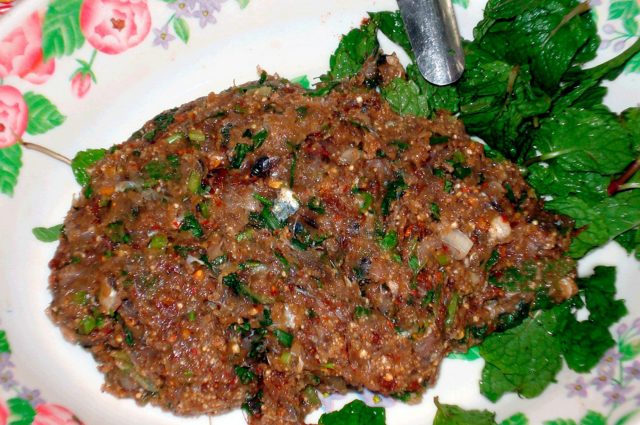 From the looks of it, Koi pla is merely a serving of finely chopped raw fish along with herbs in the mix and live red ants to top it off. You heard that, right; northeastern Thailand loves those live red ants as the topping. Regardless of those creepy crawlies smothering the dish, this eatable actually poses a great threat: liver cancer.

No wonder many people in this part of the world have reported great levels of liver cancer. According to reports, almost half of the male population suffers from the chronic disease. Compare that to the worldwide figure of just ten percent, which goes to show how alarming the situation really is. Interestingly, those live red ants are not primarily responsible for this but the freshwater fish that form a vital part of the dish.

Doctors are trying their utmost to spread awareness about the disease and how it is accounting for so many deaths in the region. Dr. Banchob Sripa believes that the liver fluke is capable of making a chemical which can stimulate what he refers to as host immune response. This causes chronic inflammation that eventually leads to cancer. Ofcourse, these flukes come from those tiny fish in the dish.

As soon as the flukes make their way in the body, they begin to grow and lay eggs. Upon excretion, the eggs often make their way back into a body of water where a snail would injest them which is, in turn, eaten by some other fish. Thus, the cycle continues. As for the flukes in the body, they release a sort of protein which accounts for its cancer-causing nature. More precisely, it is a sort of granuline that mimics the human growth hormone.

There is a silver lining here; the trend seems to be changing due to the awareness campaign by scientists. The infection rate has quickly started to dip from an insane 80 percent. Young people seem to in charge of this turn around with some older folks still holding on to the tradition of sorts. Dr. Banchob believes that it might be important to make fish cleaner for the 10 percent that are still stubborn about it. Only time will tell how much that contributes to the changing tide.

Want Your Kid to Play Pro Soccer? Sign Her Up for...

GizmoCrazed - July 6, 2019 0
The Women’s World Cup is in full swing, and today the Americans will face off against France in a battle to advance to the...

Healthier and Tastier Chocolate will soon be available

When It Comes to Robots, Science Is More Creative Than Hollywood