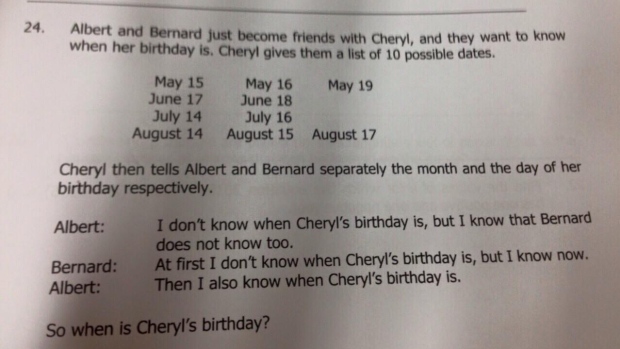 Only a few months back, some colours on a dress created havoc on the internet. A new math problem has surfaced which is now creating the headlines on the world wide web. The math problem first showed up on Facebook when a Singaporean television host ‘Kenneth Kong’ shared it. People have been attempting to sort Cheryl’s birthday ever since.

The words used in the script are the real problem here. Here is a look at the logic of the math problem:

Cheryl thought a second and said, “I’m not going to tell you, but I’ll give you some clues.” She wrote down a list of 10 dates:

“My birthday is one of these,” she said.

“Can you figure it out now?” she asked Albert.

Albert: I don’t know when your birthday is, but I know Bernard doesn’t know, either.

Bernard: I didn’t know originally, but now I do.

Albert: Well, now I know, too!

When is Cheryl’s birthday?

It was later discovered that the math problem was meant for high school students for an upcoming math olympiad. Once can only imagine what a tough nut to crack such a problem would be for fifth graders. No fifth grader deserves to be mentally abused with such a thing at such a tender age, right?