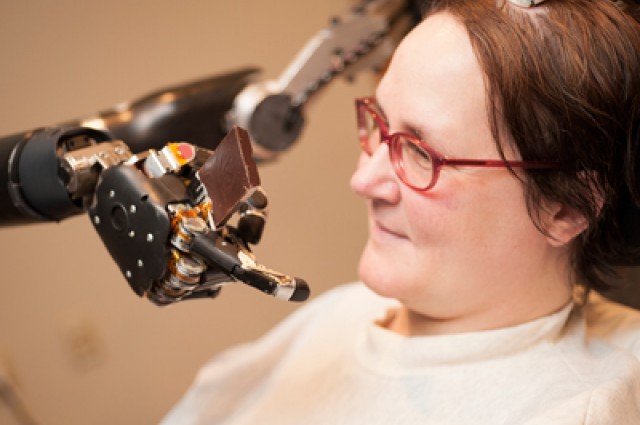 It is not unusual for us to be absolutely surprised by the marvels that science can achieve. It’s these advancements in science that allowed a paralyzed lady to use her thoughts to achieve control over a robotic arm. The same lady can now use her thoughts to fly an F-35 Joint Strike Fighter. This technological innovation was showcased by Arati Prabhakar, director of DARPA during the New America Foundation’s Future of War conference.

Jan Scheurmann is a fifty five year old mother of two who suffers from neurodegenerative illness which left her paralyzed from neck down since the year 2003. She volunteered for a trial at University of Pittsburg whereby surgeons planted a couple of miniature grids in her brain. These were placed in a specific region of her left motor cortex which controls the right hand and arm movement.

Scheurmann could control a robotic arm merely with the use of her thoughts since the algorithm would tie the patterns of her brain activity to thoughts regarding certain arm movements. She got used to moving both arms to the extent that she could perform high fives, feed herself and move objects around. This is interesting since the left motor cortex usually controls the movement of the right side.

Director DARPA agreed to her extension in the project given her tolerance to the implants. He also remarked that she was interested in trying new challenges. The F-35 Joint Strike Fighter was her wish being fulfilled in that sense. Prabhakar appreciates that for someone who has not even sat in a cockpit before, it was quite a feat. Unlike pilots’ way of flying, she focused on directly guiding the Jet.

Director DARPA is convinced that this opens a door of opportunity for others to explore. He believes that there are amazing things that could come off this opportunity which can especially free the brain of the limits of a person’s body. He still stresses the need to consider the ethical repercussions of any advances in this direction.

GizmoCrazed - December 4, 2017 0
A technician works on the Large Hadron Collider at CERN. (Credit: Anna Pantelia/CERN) What happens when you stick your head inside a particle accelerator and...