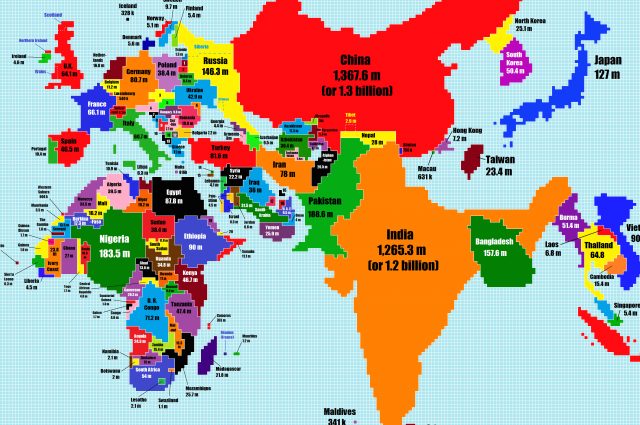 Redditor TeaDranks happens to be a cartographer who has rescaled the countries in the world as per the population size. It makes one wonder why Australia is completely out of the picture. Do note that this doesn’t take account of the geographic area of the countries in view.

Cartography is one clever way of being able to understand the dynamics of the world. Where some countries are especially prominent on the world map, others nearly vanish in this scenario. Take the example of India and Canada. India hogs a good amount of space whereas Canada barely takes much space at all.

Speaking of the other countries present on the map, North Korea with its 25.1 million people enjoys greater population than Australia that has a total of 23.7 million residents. On the other hand, Denmark has nearly vanished off of this map. This is far from what we are used to seeing on the map. Similarly, China makes Russia look smaller opposed to the kind of sight we have been used to.

TeaDranks clarifies that his map has a scale that is twice as much as the usual map. Since the projection of a spherical globe on to a map results in a flat plane, any map ends up distorting the true picture. A number of techniques are employed by cartographers in order to overcome these shortcomings in the design.