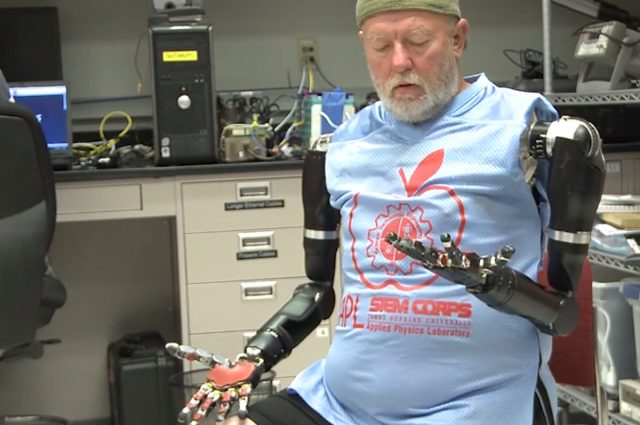 Advancements in science and medicine continue to surprise all and sundry. The idea of being able to control a robotic arm with one’s thoughts is not entirely unprecedented. A woman was reported to benefit from brain-computer interface tech to accomplish this merely a couple of days back. Now there are reports of a male double amputee who can control both his robotic arms using his thoughts. All he required was a brief period of training after which he could perform most tasks, that involved the use of his arms, only by thinking about the task. Don’t you just love science?

Leslie Baugh was unfortunate to be involved in an electrical accident that left him with no choice but to have his arms amputated right up to shoulder level. He decided to partake in the trials conducted by John Hopkins University scientists fourty years later. These scientists had been working on the development of prosthetic limbs as a constituent of their Revolutionizing Prosthetics Program for the past decade. The purpose of the program is to “restore near-natural motor and sensory capability to upper-extremity amputee patients.”

The trials were going to help the researchers test for the usability of these prosthetics.  Baugh required surgery prior to this in order to have his nerves redirected to the connected devices. The scientists then made use of recognition algorithms that identified muscles which contract upon movement. These were to be translated into actual movements. Baugh received training courtesy of a virtual reality variant in order to prepare him for the real deal. The prosthetic limbs were then attached that had the support with a shoulder socket. It’s this same socket that also joins these devices with reinnervated nerves.

Interestingly, it took Baugh merely ten days to prepare himself. He can now pick objects and move them around with his prosthetic limbs only by using his thoughts to control them. In case you’re wondering, he can even control those prosthetic limbs independantly at a time. There is now hope for Baugh as he returns home with his arms back.

Why Sleep Deprivation Affects Us All Differently

The Peculiar Math That Could Underlie the Laws of Nature