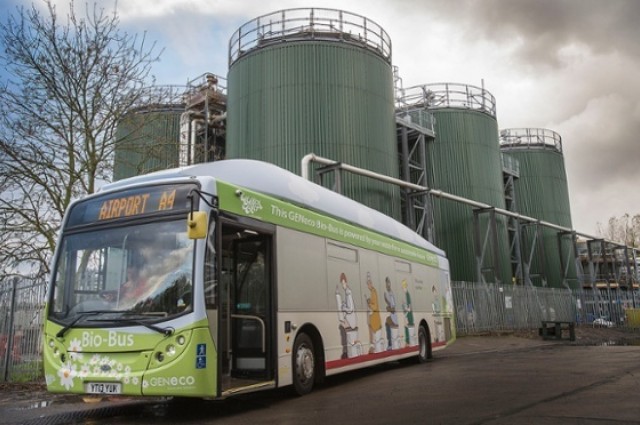 You would not usually imagine human poop being put to many uses. Infact, the very mention of it would make many gross out. You might be surprised to know that brown is the new green in the UK. That didn’t sound quite right; to clarify, Britain is using human poop to power buses that take passengers between Bristol and Bath Airports. This new bus uses biomethane gas that is generated from human and food waste. Its combustion engine is very much like diesel engines in buses these days. The difference is that the gas is stored in tanks on the roof.

This form of gas is produced by the usage of anaerobic bacteria that are deficient in oxygen. These bacteria break this waste into gas that is rich in methane. Carbon dioxide is removed from the gas and propane is added prior to its use. Ofcourse, other impurities also need to be removed in order to do away with any residual odor. The upside to all this is that the energy is much more sustainable as it emits gas at a much lesser rate than the usual diesel engines. It might be a bit of an unsettling thought for some but an individual’s annual food waste is sufficient to power a bus for 37 miles. Each tank that stores the gas contains the annual waste of nearly five people.

GENeco, responsible for this fresh project, generates nearly 17 million cubic meters of the gas each year. This is sufficient energy to provide power to about 8,300 households. The company has already started to inject the gas into the national grid network. Biomethane produced in a house is able to replace ten percent of the gas requirements of the UK residents. CEO of Anaerobic Digestion and Bioresources Association has clarified that it is the only renewable resource available for HGVs.