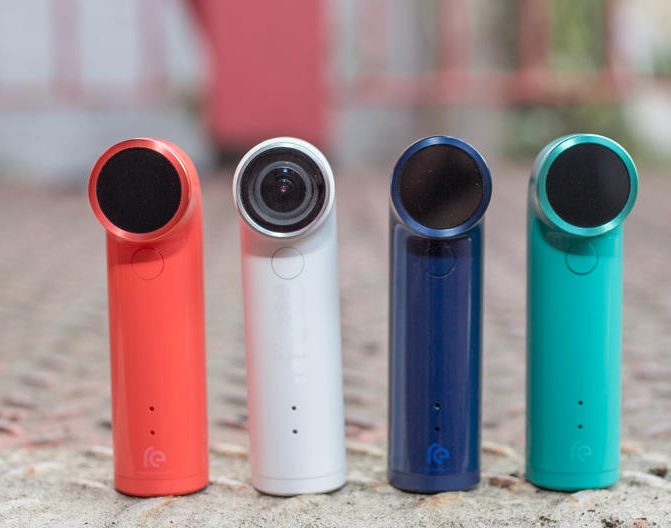 HTC seems to have come out with a camera that does not quite seem like one. Yet, the company would want you to capture every cherished moment of your life with this. Known as the HTC Re, this camera is meant to replace your smartphone as far as the camera department is concerned. Afterall, cameras are supposed to take photos, right? HTC points out that people normally just use their smartphones to capture those moments but those snaps are only just experienced via the smartphone display. HTC Re is different; the pipe-shaped device lacks display and puts you in the moment.

The camera is extremely light and uses a small battery, thanks to the exclusion of any sort of display. Despite the small battery, it is capable of recording video for hour and a half and capturing up to 1,000 photos at 16 megapixels. You will only find two buttons on the snapper. The one in silver at the rear end takes photos when you press it once while holding it records videos. The cue that follows can be easily heard so that you are aware what exactly you are using it for. All photos and videos are stored in the 8GB card that arrives with HTC Re.

The extra wide lens on the HTC Re easily compensates for the absence of viewfinder. Speaking of the width, it is capable of capturing views spanning 146 degrees. In order to focus, it simply zeroes in on the object that is closest to the camera. Interestingly, HTC has built no ‘on’ switch into this device. The capacitive layer in the handle of the camera needs to be touched which brings it out of standby mode. If you are wearing gloves, pressing the capture button will also serve the same purpose. The amenities do not conclude here: HTC Re also features a water-resistant exterior body and is capable of working with its companion app. It lets you adjust settings and view everything you have captured. Not happy with the angle of a certain photo; alter that using the app.

As far as pricing goes, the HTC RE will set you back by $199 when it becomes available later in October in four colours. AT&T, T-Mobile and Verizon will put these up on shelves in November. Ready to get your hands on one of these? Do let us know in the comments below if they caught your interest.