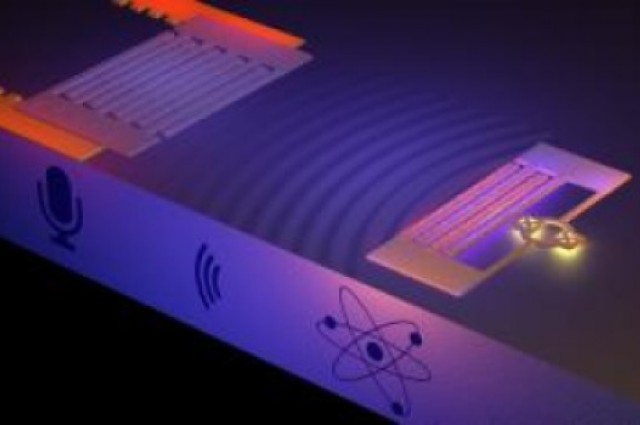 Ever since the late 19th century there has been painstaking research in to the quantum world. Experiments have been carried out by scientists that yielded the discovery of the electron, the nucleus of the atom, its constituent protons and neutrons and today we have something called the particle zoo that catalogues all of the subatomic particles known to man. However, no one can ever claim to have laid eyes on an atom. Sure we’ve gotten to the point of ‘observing’ them quite easily but actually seeing them is a different matter altogether. But has anyone ever ‘heard’ an atom, well yes.

The Chalmers University of Technology in Sweden conducted an experiment to pick up high frequency and low amplitude sounds from a supercooled, vibrating “atom”. The atom though wasn’t an atom in the conventional sense, it was an artificial atom; a quantum electrical circuit.

The atom was excited with inputs of sound energy and then a tiny microphone picked up the resulting vibrations called Surface Acoustic Waves (SAWs).

The experiment was carried out on the surface of a microchip at 4.8 GHZ (microwave frequency) and at 20 Milli Kelvin. This allowed the ‘atom’ to be ‘controlled’ in a sense. Since transmitting energy through light is not very precise due to its speed and dual nature, sound has provided a window in to a new realm of science.

Can a dreaming AI fix low res digital photos in the...

Silicon Valley's Breakthrough Prizes Have Money, but They Need Diversity Too

Scientists Go Back in Time to Find More Troubling News About...