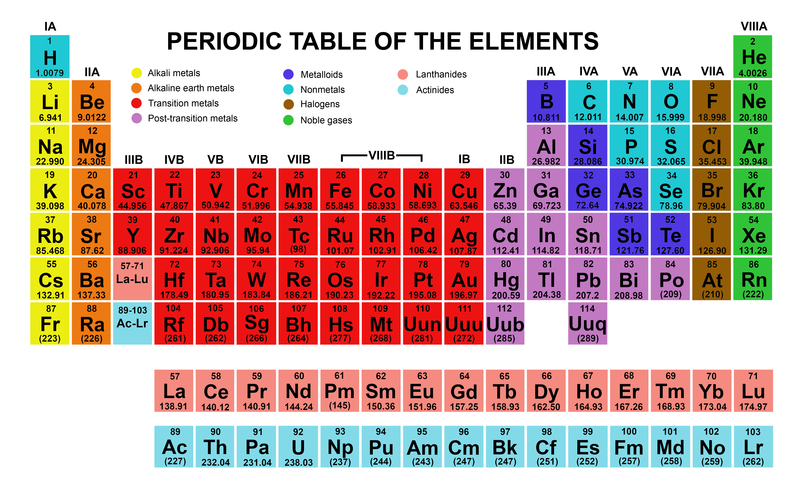 Here are 19 things about the Period Table you didn’t know before.

1. Don’t write off the Periodic Table of the Elements as just another boring scientific chart, as it is actually a really good cheat sheet.

2. It was created back in 1869 by a professor at the University of Sty Petersburg, Dmitry Mendeleyev. Realising that he was going to miss his deadline, rather than go into detail about all of the elements known at the time, he used already known data that others had gathered regarding atomic weights.

3. In order to get their results, scientists had to send currents through solutions to sort them into constituent atoms. Atoms would go one way or the other and then collected separately before being weighed.

4. Chemists could then work out the weights and it was this information Mendeleyev used.

5. As he loved card games, each weight went onto a different index card and then similar ones went into the same suit before being filed into columns be ascending atomic weight.

6. This was the basis of the Periodic Law – “Elements arranged according to the value of their atomic weights present a clear periodicity of properties”

7. If anything was missing, he added his own figures – gallium, germanium and scandium where a few of the ones he predicted.

8. If something didn’t fit his table he denied it existed. This included neon, Krypton, radon, helium and xenon.

9. He did accept eventually that the noble gases had been missed out and considering this was 12% of the items it was a big mistake.

10. An atomic number is determined by the make-up of oppositely charged electrons.

11. Noble gases are almost inert due to closed shells of electrons.

12. If the middle section of the table is taken out, and a fold is made along the centre of the group 4 elements, it will be possible to work out the ones with complementary electron structures will kiss.

13. Common compounds will be predicted due to items that touch – sodium and chlorine make table salt and potassium touches chloride – meaning lethal injections are possible.

15. Group 4 Carbon atoms join together in long chains, and as a result there is sugar. Carbon is considered to be one of the key molecules of life due to its chemical flexibility.

16. Mendeleyev made some wrong assumptions and one was that elements would not change. Radioactive atoms can uranium will decay down to lighter elements and eventually becomes lead.

17. 92 is the highest number for a natural element and others come from elements meeting elements.

19. It has been suggested that 137 is at the outer limit of the table and if there were to be other protons added it would provide energy that would have to be quantified by a number that could only be imagined.

BONUS: Physicist Richard Feynman has come up with this theory and therefore says elements higher than 138 would be impossible – perhaps.

Phiar raises $3 million for an AR navigation app for drivers

GizmoCrazed - November 29, 2018 0
Augmented reality is a very buzzy space, but the fundamental technologies underpinning it are pushing boundaries across a lot of other verticals. Machine learning,...

Twitter's Jack Dorsey gets roasted for his ignorant tweets about Myanmar