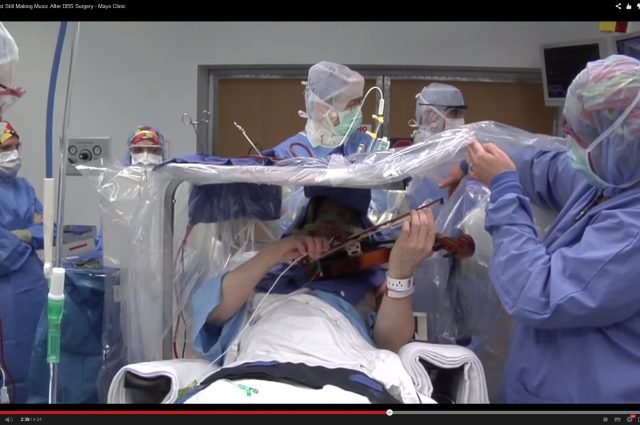 Those who have read about the life of Einstein probably have come across his love of music and his hobby of playing the violin. He often commented on the ability of music, especially when he played the violin, to clear his mind of doubt and confusion. Well this technique seems to have worked for another by the name of Roger Frisch, though in a very different context. Roger of the Minnesota Orchestra had a brain surgery that he literally fiddled through. While the surgeons were picking at his brain he played his violin. But Why?

The surgery was deep brain stimulation. Basically electrodes are planted in the brain, in this case in Rogers thalamus, to stimulate brain activity by sending out specific frequencies. The science isn’t quite understood because some frequencies work and some make things worse for patients but no link as been found between the specific frequencies and the effects. The treatment is done to alleviate the effects of Dystonia and Parkinson’s.

In the case of Roger, his shaking fingers were interfering with his career as a violinist. The tremors were light, so identifying their source was a major problem so the surgeons gave Roger an especially designed violin to play during the surgery with an accelerometer to detect the source of the nervous stimuli. With the source identified the electrodes were accurately planted and the surgery was a success.

As you can see in the picture above, even before the surgery was over Roger was looking happier. Whether that was because he was playing music or because he knew he would be OK is open to interpretation.