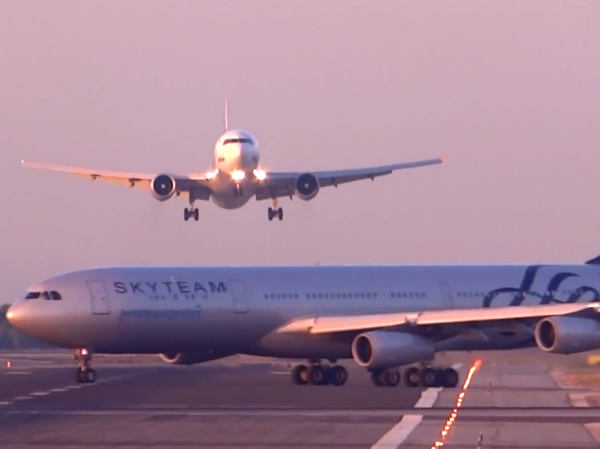 Ever heard the expression, missed by a whisker? Even if not, this close shave between two airplanes at a Spanish airport in Barcelona will teach you all about it.  An aviation enthusiast, Miguel Angel made it possible for us to see this as he caught it on his camera and put it up on YouTube. Even he considers this to be one of the worst experiences he has had in his lifetime. No wonder this video got greater than a million views as opposed to his usual airplane videos that get merely few hundred views. Here is how it all  unfolded.

One Boeing 767 Airplane was approaching the runaway for its usual landing. When it was about to touch the ground, in came an Aerolineas Argentineas Airbus A340 right in front of it. The plane pulled up just in time to take another round before safely landing after a while. There are only three possible reasons for the incident that flight training manager John Holmes can think of. Either the captain misunderstood the instructions to the Airbus A430 or they might not have been heard at all or there could have been no instructions given in the first place.

Luckily, the pilots on the Boeing 767 Airplane had a nice view from where they sat and were aware of the situation they were faced with. That prompted them early to delay the landing and take the plane for another round before finally landing it. All is well that ends well, I’d imagine.

GizmoCrazed - April 29, 2018 0
Rip Pruisken waffled in college (we got that pun safely out of the way for now). He was a student in the Ivy League...

What To Expect From Apple’s iPhone Event On September 9

How To Monitor Your Business Using SugarCRM