Google is already out with the new with its announcement of its Android Wear OS that is fully optimized with smartwatch. What are the odds that Apple will follow up with something along similar lines? Plenty. There has been news about a team of developers working on the iWatch since last year but that’s really all there is to it so far. There has been guess work going on as people present their thoughts on what Apple could have in mind. Nermin Hasanovic is among the group of people who are of the view that it will be more along the lines of Moto 360.

The likes of LG and HTC were expected to jump on the Android Wear bandwagon when Google ventured into that world. It is no surprise that Motorola would also be venturing into a world such as this as Moto 360 is showcased to the world. The Moto 360 concept that Apple may mimic would run the iOS amenities such as Siri. What is even more exciting is the fact that Healthbook will also be supported with the iOS 8 that will be on offer. The design presented by Hasanovic is a good indicator of the way this would all turn out on the iWatch. 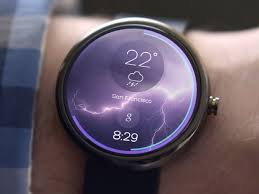 Speaking of health apps and the market that evolves, Apple seems to be benefiting from its partnership with Nike. What better way of selling fitness products, huh? Healthbook would be a good mix of apps that could help monitor the calorie intake to those that help keep the blood pressure in check. The design of the smartwatch might not be stellar per se , but there’s no denying the brilliance with which the apps are lined within the display. It seems more or less uncomplicated just like any other Apple product and still manages to boast premium quality. It is still early days but hopefully we would be hearing more about it in the days that follow. Until then, feel free to share your take on the iWatch in the comments below.

Get this handy, $8 grip and stop dropping your phone for...

What Adam Savage Needs to Know to Fly an Iron Man...

The Dark and Light Sides of Latest Drone Technology