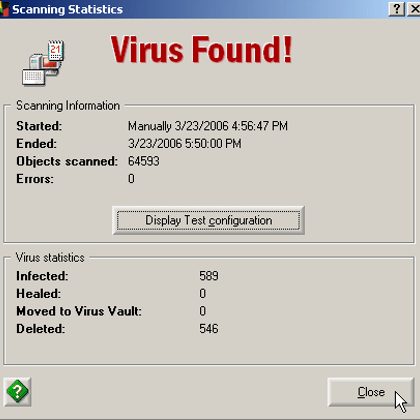 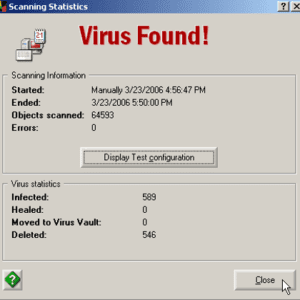 What could take down the British Coast Guard, Agence France-Presse, Delta Airlines, and a smattering of universities, hospitals, and large corporations? You know, the typical German 17-year-old teenager. Sven Jaschan didn’t serve any jail time for his global take down, but he was sentenced to 21 months of probation and community service. Nothing like a little slap on the wrist to fix a global catastrophe!

The top virus in 2001, Nimda, or “admin” spelled backwards, became the most widespread virus on Earth in 22 minutes. Spread through emails, websites, and server vulnerabilities, the virus had a special sense of fear since it hit only a little after the September 11 attacks.

A new virus for the e-mail age, the Melissa virus took advantage of email attachments and took viruses to a new level by introducing using your address book to send itself to all your other contacts. The viruses creator, hacker David Smith, said he wrote the virus for a stripper he met in Florida.

Making its move in 2001, the Code Red viruses attacked more than 200,000 servers. The virus was a particularly sneaky and dangerous because all it required to infect and enslave your computer was an active Internet connection and a flaw in the Windows operating system. The virus attempted to overload the White House computers with its new drone computers, but was barely unsuccessful.

An “experiment” at the start, the Morris worm was distributed by Robert Tappan Morris to gauge how big the new born internet was in 1988. Just like living viruses though, the Morris worm took on a life of its own and got way out of control. It spread to 6,000 university and government computers and slowed them down and crash. Morris was convicted and fined, but didn’t serve any time.

The ILOVEYOU virus sent users an e-mail with an attachment labeled as a love letter. If you were excited or even just curious and opened the attachment, the virus would replicate itself on the computer’s hard drive and downloading a password-stealing application from the Internet. Billions of dollars in damage have been estimated worldwide.

A fairly simplistic virus, the Brain targeted PCs in 1986 with Microsoft’s DOS operating system. The virus used up large chunks of memory causing computers to display a warning message about the infection, and even giving you a number to have it disinfected. The number was for two brothers in Pakistan who had developed the virus code, meant to act as copy protection for their medical software, but the code was stolen and used for less innocent means.

Nobody was sure what the Conficker virus would do in late 2008, because it didn’t seem to be doing anything at all. Conficker was collecting an army of computers, or a botnet. The virus began having infected computers contact specific sites on certain days, but why nobody really knows.

In 1982, ninth-grader Richard Skrenta wrote a virus that targeted Apple II personal computers. What did the virus do? Every 50th time the computers booted up they displayed a poem. While rather innocent it was groundbreaking in its time – and all started by a high-schooler.

A relatively new problem, many of us have a difficult time remembering when we didn’t have to deal with computer viruses. From humble high school beginnings to dangerous security risks, computer viruses are likely to stay and only get more sophisticated.

GizmoCrazed - November 3, 2017 0
Consolidation continues to dog the world of on-demand startups — literally and figuratively. In the latest development, Vetted, a startup focused on veterinary services,...