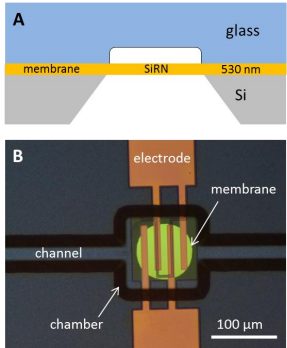 What if you accidentally invented something one day and had no clue what it was and how it worked? Would that be a recipe for disaster or a challenge that you would gleefully accept? Well, there’s certainly one such invention by scientists of late. Take a look at this microscopic engine, for instance. Scientists ended up inventing this little thing but had no clue how it would operate.

Vitaly Svetovoy from the University of Twente recently announced a micro-engine that boasted great power using water and small amounts of electricity. This electrical engineer believes that his invention could prove to be the initiator to such small sized combustion engines. The major issue that he faced was that scientists had no clue how it would work.

The main idea is clear, ofcourse. Electric current travels through the pair of electrodes present in the water filled chamber of the micro-engine upon which the water breaks down into hydrogen and oxygen. This, in turn, leads to the formation of nanobubbles. The moment the microengine is turned off the bubbles increase in volume to the extent that the membrane holding them together is contained within. Yes, you got that right: scientists have NO idea why.

The turning effect of forces of nearly 100 nanometers produced by an engine this little is still quite significant. Scientists only assume that force this significant could be a cause of the hydrogen and oxygen found in the nanobubbles that form due to combustion. There is no surety about that, though. As mentioned before, though, for an engine to be so much productive is still quite appreciable.

Further experiments on this new invention may well produce the answers that many have been looking for but it remains a bit of a mystery at this point in time. Let us hope that someone is able to wrap his or her mind around the idea and can solve this mystery soon. Until then, perhaps we could bug some science professors to come up with their theories.

How To Change The Default Browser In iOS

GizmoCrazed - June 20, 2011 0
Many iOS users find it difficult to change the default browser (that is Safari) in their iPhone, iPod Touch etc. Today we have come...

What Happens Now? Studies of Sexual Harassment Can Show the Way