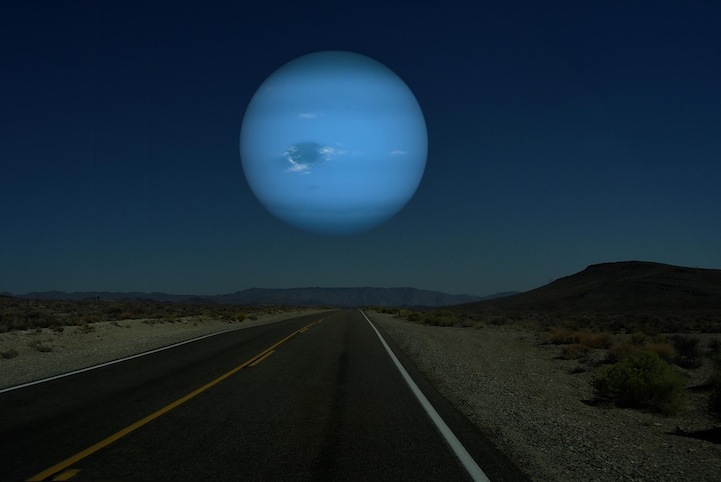 Have you ever wondered what the sky would look like if you looked up and found Planet Saturn looming large overhead instead of the moon? It won’t be surprising if you can’t exactly wrap your mind around that thought, though. After all, the scale of planets, that are millions of miles away, is what usually concerns astronomers.

This is where the limited capacity of our minds is of little to no use. No worries, though. The scintillating series of images designed by Ron Miller, ex-art director for NASA, is an interesting illustration of the planets, if they were as far away from Earth as the Moon.

Ron Miller claims that his love for astronomy and an “utter ineptitude with math” inspired him on his way to the rather distinct path of art. The digital trickery that Miller makes use of in order to accomplish these incredible illustrations justifies this claim.

The primary focus behind these drawings is to catch people’s imaginations and make people appreciate the size of various planets that we share in the solar system. In order to achieve this task, the scale drawings of various planets were superimposed over the exact same landscape.

Not only did Miller calculate the elevation of a given planet, but he also decided on the width of the image that he wanted to portray. According to Miller, a typical image took anywhere between 50 to 60 degrees. These calculations would then determine the amount of room that he would have to create for the planet in a given picture.

Each and every planet in the snapshots was portrayed as though it were a total of 240,000 miles away from Planet Earth. Understandably, that was done in order to emulate the same distance of Planet Earth from the moon.

Miller was very heartened by the pleasant reaction to his illustrations: ‘The reaction to the illustrations has been fantastic. I’m very pleased because they were created to inspire people. Plus, the only way I get to visit these planets is through my illustrations.’