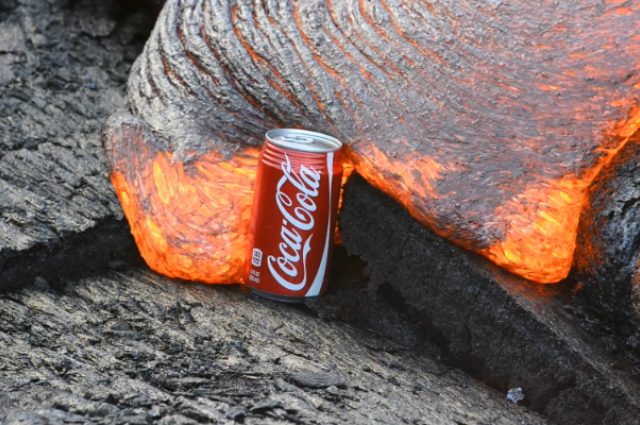 Opening a can of Coke the way you usually do is too mainstream, don’t you think? How about molten lava doing you that favour instead? Considering that molten lava videos fascinate most, adding Coke among the cast will simply make it a YouTube hit. Here’s a look at something along those lines as molten lava meets a can of Coke.

The man behind the GoPro Hero 2 and Nikon D800 snappers, Bryan Lowry, is renowned for his videos of lava flows. This recent one employs a more iconic beverage in Coca Cola. It’s important to note that the first can had a tiny hole punched in it to keep it from randomly exploding. Seemingly, Lowry was successful in doing so.

Lowry was able to exhibit the effects of 2000-degree molten lava on varying sealed commodities. However, he discourages conducting any such experiments at home. As evident in the video, even his own camera equipment was threatened by the splash but it turned out just fine; just a little sticky.