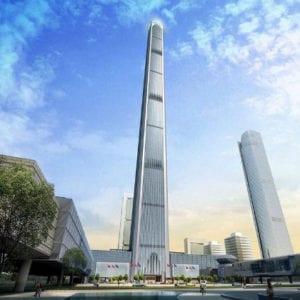 Construction of second tallest building in China, Goldin Finance 117, began in 2008 with a planned 117 stories. However, in January 2010 construction was suspended but later resumed. The current completion is estimated to be in 2015. 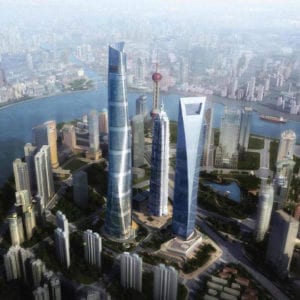 The tower’s name literally translates to “Shanghai Central Tower” and is being built in Luijazui, Pudong, Shaghai. Expected to be completed in 2014, the building will have 121 stories. It is the tallest of three skyscrapers in Pudong, the other two being the Jin Mao Tower and the Shanghai World Financial Center. 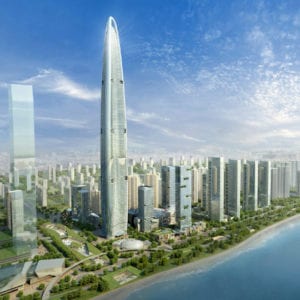 The design for the tower began with a competition for the Greenland Group design. The competition was completed in June 2011 when Adrian Smith + Gordon Gill Architects and Thornton Tomasetti’s engineers won the chance to work together on the design. Expected to be completed in 2017 with 125 stories, the building will feature cutting-edge energy saving technology. 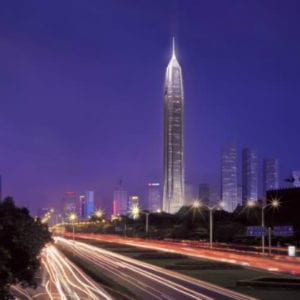 Under construction in the Shenzhen, Guangdong prince, the Ping An Finance Center is expected to be 115 stories upon its completion in 2016. It is predicted to be the third tallest building in the world at its completion date. It will also have a building complex with a planned retail bridge to connect future southern developments. 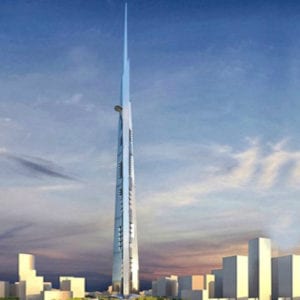 Planned to be the centerpiece and the beginning of a the Kingdom City development, the Kingdom Tower is currently under construction. Located along the Red Sea, the tower will be the tallest building in the world if it is ever completed. The tower has already been down-sized from its initial 1 mile height due to unstable geological conditions.

Many of these projects seem implausible at best, but still, with advancing technology, humans are seeking and succeeding at reaching new heights every year.

GizmoCrazed - March 15, 2015 0
CIA seems to be having trouble recruiting spies due to more and more people growing overly fond of Facebook. Interestingly, about six bright candidates...

Gmail App For iOS Returns to App Store — Download It...