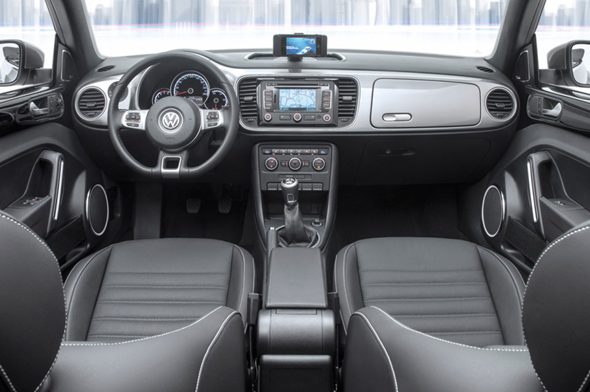 Rumors about Volkswagen working with Apple to produce a car that could integrate an iOS device into its system started back in 2011. Recently, the German automobile manufacturer showcased the Apple iPhone-integrated “iCar” that is expected to be released early next year.

The integration is not really that deep, in fact, it is superficial in a sense that the iPhone was just given a docking station on the car’s dashboard. According to the car-maker, there will be two models that will be released in early 2014–Coupé and Cabriolet — with specialized docking station for the iPhone.

The integration between car and the phone will be interfaced by Volkswagen proprietary app called Volkswagen Car Net The Beetle. Once docked, driver would be able to use iPhone features like navigation services, dial or receive a call via hands-free unit, and even listen to music. The phone will be connected to the car’s amplifier system so audio will be audible enough through the car’s built-in speakers.

The iBeetle will be made available at the beginning of 2014 in six different colors: “Candy White”, “Oryx White Mother of Pearl Effect”, “Black Monochrome”, “Deep Black Pearl Effect”, “Platinum Grey” or “Reflex Silver”.

GizmoCrazed - September 17, 2010 0
It's the first impression that counts and with games the way to make that impression is through the all important trailer. The video game industry...