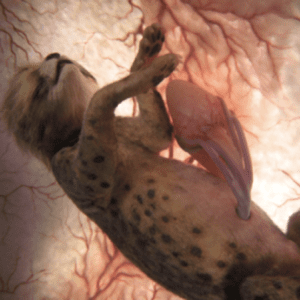 This small cheetah is about two months into its three month gestation period. At around two-thirds to its birth date, this small cheetah fetus is already showing its distinctive spots and small claws. While completely helpless once born, this cheetah will one day be the fastest feline, or carnivore for that matter, in the world. 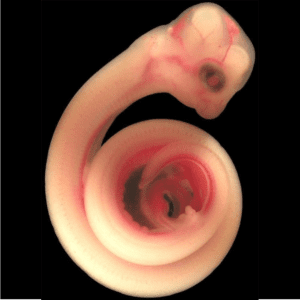 While snakes are one of man’s most popular creatures to fear and hate, it is a fascinating creature that seems to have similarities with lizards and young birds at this stage. This ultrasound of a corn snake is observed from inside an egg that is hard and much like a bird’s egg. It also shares a distinctive brain region and well-defined spinal column with its lizard brethren and young birds. 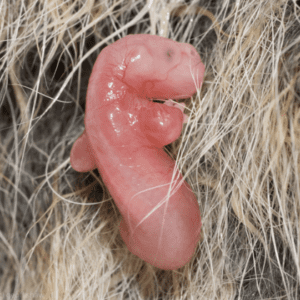 The marsupial opossum’s birth process includes almost two births. This picture is of the fetus opossum that has been born for the first time. While in this stage, the fetus makes its way to its mother’s pouch to fully develop before being ready to be “born” for a second time. 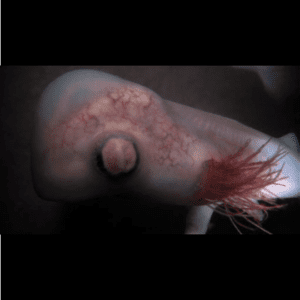 This newest member to the fastest tropical shark species in the world is only starting to develop. At this stage the small fetus looks more like a tadpole and you can see the frills that are the start of its gill covers. Once born its immediate prey will be fish but eventually with more maturity this tiny shark will be able to grab seabirds from the tropical surfaces. 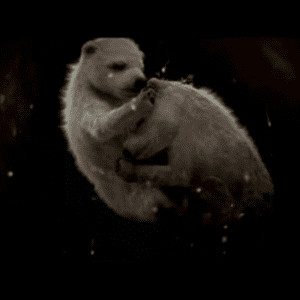 These small fetuses will one day grow into the largest carnivore species on land, but right now are only two-thirds through their gestation. Still, these brothers already sport their tiny claws and warm insulating fur. While it looks like these two fetuses are sharing some sibling love, sibling rivalry is inevitable and will only escalate after birth.